Cuomo Likes To Throw A Lot Of Money At Projects...When They're His

On the evening of New Year's Eve, with the state legislature not yet in session and most New Yorkers focused on ringing in 2017, Governor Cuomo vetoed a stack of bills that had been on his desk for months. Given that those bills had passed both houses of the state legislature to get to that point, they had broad support. Among them were a bill to create a uniform state funding mechanism for New York's public defenders, and a bill to create a new class of safety-net hospitals and require the state to provide increased Medicaid reimbursement to those facilities.

The proposed public defense funding would address longstanding shortfalls in New York's system, currently funded at the county level through a patchwork of public defender offices, Legal Aid Society branches, and private lawyer contracting schemes. New York officials have noted the inadequacy of the state's indigent defense basically since the 1963 Supreme Court decision Gideon v. Wainwright established a right to counsel—in 2006 a state commission deemed the system in "crisis," and said it failed to adequately represent "a large portion" of poor defendants. A 2014 class action lawsuit settlement forced the state to support under-resourced offices in five counties. The bill would have implemented this statewide.

The Medicaid reform bill was meant to address discrepancies between the Affordable Care Act and the state's formula for reimbursing hospitals that treat patients who don't pay their share of the bill. The current arrangement throttles the hospitals' reimbursements, effectively punishing hospitals that take in a large portion of uninsured/nonpaying patients. The new structure would have effectively subsidized these hospitals so that they could continue taking charity cases.

In his statement accompanying the veto of the hospital bill, Cuomo wrote, "This bill would result in increased and unbudgeted costs to the Medicaid program, which will ultimately be shouldered by the State's taxpayers." Instead, he said, this "should be addressed in the context of the annual budget negotiations."

Until the last possible moment, we attempted to reach an agreement with the legislature that would have achieved the stated goal of this legislation, been fiscally responsible, and had additional safeguards to ensure accountability and transparency. Unfortunately an agreement was unable to be reached and the legislature was committed to a flawed bill that placed an $800 million burden on taxpayers—$600 million of which was unnecessary—with no way to pay for it and no plan to make one.

These two statements taken together make it sound as if Cuomo takes great care in protecting the state coffers from big-spending liberals who would have us all wearing burlap sacks. But it doesn't exactly jibe with his history, and present, as a big-spending "liberal" who, when he sees the project in question as attached to his political fortune, could care less where the money is coming from.

Take the reconstruction of the Tappan Zee Bridge. Not only did Cuomo not have the $3.9 billion construction funding lined up when he announced it, but he started without all the money in place, then got in trouble with the Environmental Protection Agency for trying to divert loan money earmarked for environmental protection. He still does not have a long-term financing plan. There was also last year's MTA capital budget debacle, in which Cuomo extracted newly burdensome funding commitments from New York City, delaying the budget by a year in the process, and then utterly failed to explain where the state's $8.3 billion commitment was coming from.

Also of unclear provenance: the $450 million for his roundabout LaGuardia Airport AirTrain connection, the $570 million for his planned overhaul of Penn Station, the $1 billion to redo the Javits Center, and the multi-billion-dollar Hudson River train tunnel replacement. 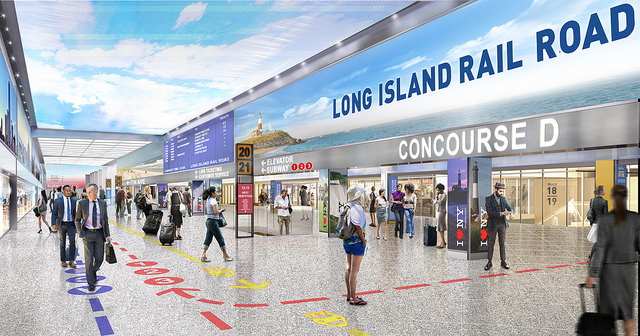 At least one MTA board member questions how the agency is going to pay for Cuomo's spiffy new Penn Station. (Governor's Office/Flickr)

Just this week, Cuomo tried to further burnish his image as an FDR revivalist by proposing a massive CUNY and SUNY free tuition program worth around $6,000 a year per student and available to about 940,000 New York families, and proposing a $10 billion overhaul to JFK Airport and the surrounding highways and rail system. It's far from clear how these will be funded either.

Tweeting about the disconnect in response to my questions, Azzopardi, the Cuomo spokesman, wrote, "Cap budgets w/ fed streams &other variables not the same as recurring general fund expenses." He emphasized that his boss plans to include indigent defense funding in his budget proposal, as Cuomo said he would do for expanded Medicaid.

As the Village Voice notes in breaking down Cuomo's political maneuverings, the Democratic governor works closely with the Independent Democratic Conference, undermining the influence of the Democrats, even when they had a Senate majority, and he prefers to push measures through the budget process, where he has more control. The Voice:

[R]evisiting [indigent defense] through budget negotiations would presumably lower the state’s investment while keeping Cuomo the arbiter of what amount of progressivism can be allowed in his state. A college tuition bill similar to Cuomo’s proposal was proposed by two state legislators last spring, but Albany's leadership tuned out. The same thing happened with the battle over the state’s minimum wage, where Cuomo ignored calls from fellow Democrats for a raised minimum wage statewide, in favor of a compromise deal, reached through budget negotiations, that leaves out upstate areas with conservative politicians who opposed the wage increase.

Cuomo's claim to being defender of the state coffers also runs counter to a central campaign of his governorship: keeping county taxes down. Cuomo has implemented an array of schemes to accomplish this, including a statewide two-percent cap on increases, with rebates for homeowners whose counties abide by the cap, and inter-county contests for which municipalities collaborate to come up with the most innovative service consolidation, with cash prizes coming from state coffers. 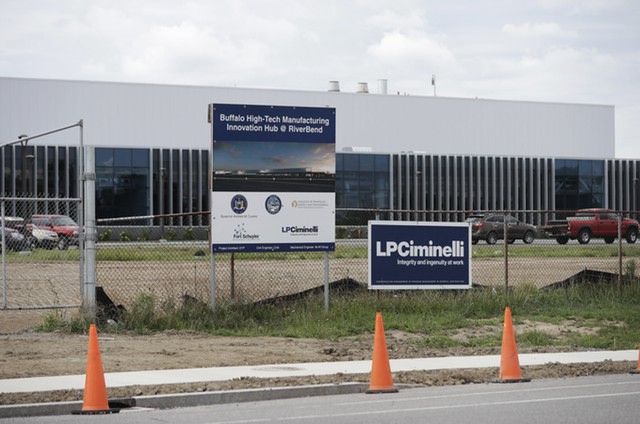 A high-tech factory that is part of the Buffalo Billion project, now at the center of federal prosecutions of some of Cuomo's closest allies. (AP)

Funding indigent defense was a prime opportunity to save counties money and thus keep them from having to raise taxes, and Cuomo dropped the ball, according to Ron Deutsch, director of the watchdog Fiscal Policy Institute.

"In reality [with the indigent defense bill] he is the one that literally holds the keys to lowering property taxes by basically having the state pick up the costs that they're pushing down to the lower level," Deutsch explained. "The fact that he's vetoing it just because there's no clear funding mechanism—we continuously put together projects that have no clear funding mechanism, in particular on the capital infrastructure side. In Albany, where there's a will there's a way."

He added, "There's always money to be had if something is a priority. If lowering property taxes is a priority, then the governor should have signed this bill."

Also, Deutsch said, tax and other giveaways to corporations and developers, a hallmark of Cuomo's economic policy, could be money better spent. Cuomo's own tax commission found in 2013 that corporate tax incentives "may not result in a good return on investment" and "more efforts are needed to measure their effectiveness." A separate New York budget analysis the same year by two economists found "there is no conclusive evidence from research studies conducted since the mid-1950s to show that business tax incentives have an impact on net economic gains to the states above and beyond the level that would have been attained absent the incentives."

And yet, half of the state's $8 billion economic development budget consists of tax incentives.

"You could take $2 billion out of the...economic development budget and use that to cover, for instance, the local cost of Medicaid for our upstate counties," Deutsch argued. "That way you could, rather than lowering taxes for a handful of select businesses, you could use that money to lower taxes for residents and businesses alike all across the board."

The governor has raised millions of dollars in campaign funds from developers who benefit from the 421-a tax break—which is supposed to but overwhelmingly doesn't create below-market housing, and which Cuomo is pushing to renew—as well as from developers and companies that went on to win bids for his signature economic development projects worth hundreds of millions. Such developers and Cuomo fundraisers, including New York City real estate giant Glenwood Management, were at the center of the successful federal criminal prosecutions of former Assembly speaker Sheldon Silver and former Senate majority leader Dean Skelos, and the ongoing cases against two former aides to Cuomo and his handpicked nanotech czar. Those cases are centered around alleged bid-rigging.

The Governor's Office did not respond to a request for comment on Deutsch's criticisms, or further explanation of why vetoing indigent defense reform makes sense.