Less than a week after Governor Andrew Cuomo attempted to distance himself from the steadily-deteriorating Metropolitan Transportation Authority, the man who essentially controls the MTA took a decidedly different approach on Tuesday. Addressing a crowd at the City University of New York Graduate Center, Cuomo challenged the MTA to look internationally for "groundbreaking and innovative solutions" for the subway's crowding and delays. If the best solution requires funding beyond the State's $8 billion commitment to the MTA's five-year capital plan, Cuomo promised he'll find a way to pay for it.

Andrew Albert, chair of the New York City Transit Riders Council and a nonvoting member of the MTA Board, chuckled during a phone interview following the announcement. "He wasn't 'I don't run the MTA' today, was he?"

Cuomo's MTA Genius Transit Challenge calls for signal system overhauls; new subway car designs or overhauls to the existing stock; and, because it's Cuomo, WiFi and cell service throughout the system, tunnels included. The winner in each category will receive $1 million from the State.

"Copenhagen [has] driverless electric trains that feature open ended cars," Cuomo said Tuesday. "In Hong Kong, every station has high speed Wi-Fi. The ideas are out there. The technology is out there. We need to get those ideas and that technology here."

Watchdogs and advocates praised Cuomo's willingness to take responsibility on Tuesday, tempered with concerns about funding. "Governor Cuomo is taking a vital step, which is to declare that it's squarely his responsibility to fix the subway," said John Raskin, Executive Director of the Riders Alliance. "The next question is: what is the actual plan, and where will the Governor find the money to pay for it?" 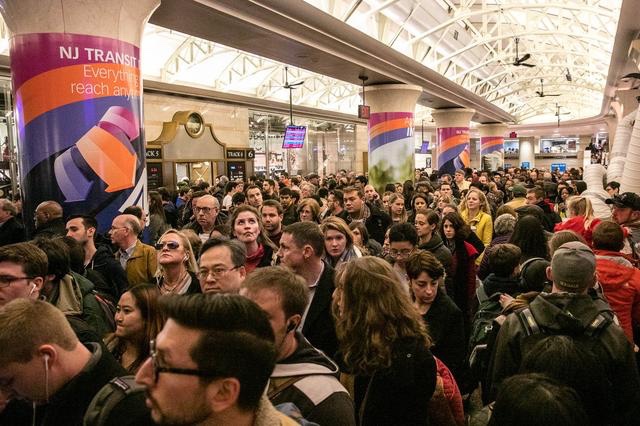 Cuomo and his spokespeople emphasize the State's appropriation of around $5.4 billion of a promised $8 billion in capital funding. But that funding will only become available once the MTA has drained all of its capital resources from years past, including debt and federal grants. Until then, the city's $1.8 billion contribution will also be under lock.

"Although there have been commitments made by the state to basically make sure the money is there if it needs to be, we don't have specific sources for some of the funds in the capital fund right now," said William Henderson, director of the watchdog group Permanent Citizens Advisory Committee to the MTA. "And this stuff is going to be expensive."

The state legislature raised the MTA's debt ceiling to $55 billion in 2016, giving the authority more leeway to borrow. It is this borrowing, Albert said, that increases the MTA's debt and, in turn, puts "more pressure on fares."

Henderson also predicted that public transit innovations successful in other cities might be more costly in NYC. "Building transportation infrastructure is more expensive here than almost anywhere in the world," Henderson said. "It's a 24-hour system, and the complications that develop, just because of what's in the ground already, are pretty amazing."

"The MTA is committed to delivering actionable, smart, innovative solutions in the short-term to fix problems that have festered for decades," said MTA Acting Director Ronnie Hakim, praising the "genius" proposal. Last week, the MTA announced a $20 million six point plan to address subway delays in the short term.

Also on Tuesday, Cuomo announced his willingness to take over much-needed renovations of Penn Station from Amtrak, which has owned the transit hub for decades, and prioritize the long-overdue Gateway Tunnel project. Such a takeover would require federal funding, as well as money from the State and private partners, according to Cuomo. "We come in the spirit of cooperation and creativity," he said.

Cuomo sent a letter to President Donald Trump over the weekend, suggesting that responsibility for Penn Station shift to the Port Authority, or a private operator. Offering his own services Tuesday, Cuomo repeatedly cast doubt on Amtrak's ability to complete emergency track renovations on schedule this summer.

Under Amtrak, Cuomo predicted, "I think you're going to see these breakdowns continue for the foreseeable future."

Meanwhile, Amtrak officials maintain they have everything under control. "It is Amtrak's role and our responsibility to step up and run that station as well as we can, and that's exactly what we intend on doing," Amtrak CEO Wick Moorman told the NY Post this week.

In a Tuesday press release, Amtrak announced plans to bring in an outside infrastructure company to speed up the summer 2017 repairs.

According to Henderson, Cuomo's latest Penn Station promise raises the same concerns as today's promise of increased capital funding. President Trump's $1 trillion infrastructure promise is still a rough sketch. "Frankly there's a real question about what the federal government's willingness to fund some of these things is," Henderson said.

The Governor's Office did not immediately respond to an inquiry about how the State might cover additional capital costs.

"We can't fault the Governor for not answering the funding question within two hours of his announcement," Henderson added. "But eventually it has to be answered."

#amtrak
#Cuomo
#funding
#MTA
#original
#penn station
Do you know the scoop? Comment below or Send us a Tip