Two Crown Heights venues where locals practice and prepare for J'ouvert and other West Indian American Day Carnival activities say they are being unfairly targeted and surveilled by a neighbor who regularly calls in 311 complaints and takes photos and video of them with her iPad.

The woman, 63-year-old Crown Heights resident Kathleen Reilly, told Gothamist that she is on a mission to curtail rehearsals for Despers USA, a steel orchestra that rents the lot on the corner of Classon Avenue and Pacific Street in preparation for Saturday's annual steelpan championship outside the Brooklyn Museum. Reilly has also called in numerous noise complaints to Pacific Gardens, an outdoor venue at 1067 Pacific Street, across from the Despers practice lot. The seasonal Trinidadian venue has been open for three summers and is home-base for Pagwah Mas, one of the largest mas (short for "masquerade") bands in J'ouvert.

Reilly, who lives two blocks from Despers and Pacific Gardens on Bergen Street, and has lived in Crown Heights for eight years, also frequently surveils Berg'n, a food hall and event space on her street near Franklin Avenue.

"It sounds like the same song," she said in a recent phone interview, referring to the Despers rehearsals. "It's extremely loud, and it's not what I want to sit in my house and listen to."

As for the venues' argument that she is throwing cold water on preparations for a major holiday: "Irrelevant. It's not an excuse, it's just a reason."

"I like to do photography, so I just photograph whatever is going on in my neighborhood," Reilly added. "I do it for my personal use. I never know what I photograph until I get home, but sometimes I see something that's strange, I just send it to the authorities."

On Wednesday night, Reilly was arrested outside of Pacific Gardens, which was hosting a party for Trinidadian Independence Day. It was her first arrest in the state of New York. Initial charges include obstructing governmental administration, two counts of false reporting an incident, disorderly conduct, and harassment, according to the NYPD. On Thursday morning, Reilly did not respond to a request for comment. [UPDATE BELOW]

"It looks like she did place some kind of recording device, possibly an iPad, to victims' faces after being told numerous times to stop doing so," an NYPD spokeswoman told Gothamist of Reilly's arrest. "Disregarded orders to stop harassing individuals, also called 911 making a false claim of a large disorderly group at the location which obviously forced the officers to respond to the scene, possibly putting officers and others in danger. Obviously there was no emergency that existed at that location."

"We were celebrating because she's been harassing us for years," said Pagwah member Monica Gill, who witnessed the arrest. "There were about 25 police officers. They made up their mind that they were tired. As soon as they walked up to her she started ranting."

"She was saying she'd been here for eight years," Gill recalled. "But this is our culture—we've been doing this for fifty." 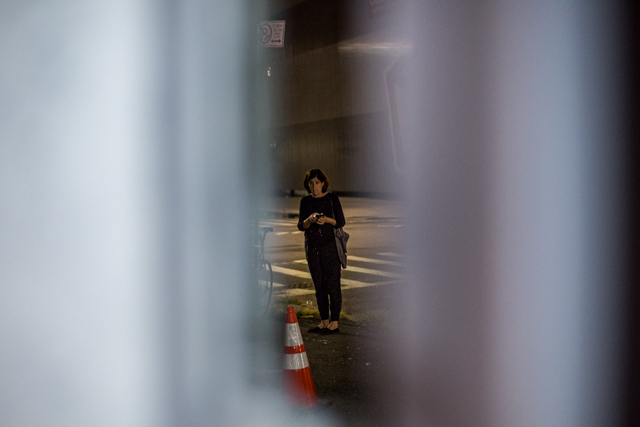 Reilly outside of a Despers rehearsal on Saturday night. (Scott Heins / Gothamist)

"And she might be the only one making the complaints, from what I believe," he added.

"Over the years Community Board 8, 77th Precinct and the Department of Environmental Protection have all been working with Ms. Reilly to address her noise concerns," said Michelle George, CB8's district manager. "No other community resident has complained to Community Board 8 about Berg'n, Despers or Pacific Gardens."

Richard Pacific, the leader of Pagwah, says that patrons at Pacific Gardens are intimidated by the woman's surveillance. Events at Pacific Gardens, which fundraise with food and drink sales, are crucial for the band to recoup losses.

"Nobody wants to come to the venue when they hear she is out there recording," Pacific said. "What is she doing with that information? All those videos that she makes?"

Hendricks Faria, 68, who owns Pacific Gardens, said that while he has fielded noise complaints from other neighbors, Reilly is a "hater."

"Every night. As long as I'm open, she's here," he said. "Since I realized what she's about, I stop her. Saturday, when she tried to come in, I closed the gate. She videotapes. It makes people uncomfortable."

Across the street, Verne Rosemin, a Despers member of 25 years and former band leader, said the group practiced until 2 or 3 o'clock in the morning during the summer until Reilly stepped in last year. Now, end-time is between 10 and 12 o'clock, depending on the night.

"Some of the players work late, so by the time they get home, eat something... let's say if we start at 8 o'clock and have to finish at 10, it's not practice," he added. "The other bands, the police don't give them any problem, because they understand."

"If you like Mozart and want to be quiet, not a problem," said Sandra A. M. Bell, who produces the performing arm of Pagwah. "But you know what? We cannot be you. We are not you. We are we. It's about tolerance, you understand?"

There have been 17 noise complaints called in for Pacific Gardens since June 1st, according to the NYPD, and fifty for Berg'n. The NYPD has no documented complaints for 635 Classon Street, which is adjacent to the lot where Despers practices. However, 311's service request map shows at least 20 noise complaints near that intersection since June 1st.

Pacific, of Pagwah, alleges that Dean, a new bar on the corner of Classon and Dean, blasts music without consequence. The new bar opened last week, according to a bartender who declined to give his name. The NYPD has not received any noise complaints for that address this summer. Nor are there any complaints against Friends And Lovers, a small club adjacent to Despers.

"If she wants peace and quiet, why is she not targeting those bars, also? Why not try to embrace what's going on in the community?" Pacific asked.

Asked why she doesn't complain about Dean or Friends and Lovers, Reilly replied, "I don't hear them so I don't care. Let other people deal with them. It's not my problem."

"She's complaining about noise, but she's really complaining about the culture, which is kind of whack," surmised Siobhan Hope-Ross, 31, listening to Despers rehearse on Monday evening with her husband, Ryan. The couple lives near Fulton and Classon, two blocks north of the practice lot, and has heard the drums all summer.

"Let's find out what music she does like and have them play that," said 28-year-old Ryan Hope-Ross. 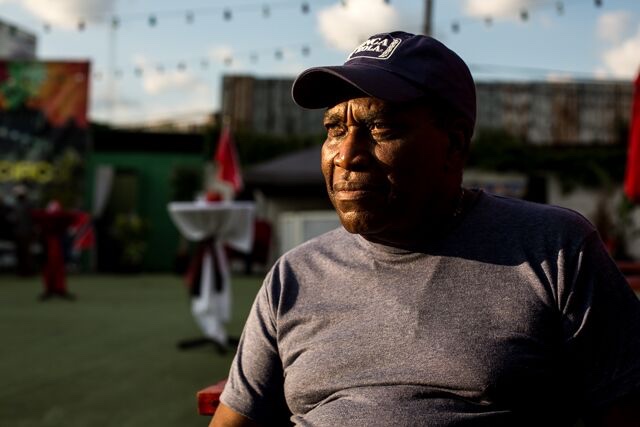 Reilly denies Despers and Pacific Gardens' claims that they have offered to meet with her. "I've never heard of that," she said. "I've never been notified of anything."

She also declined to comment on Berg'n, which opened in 2014.

"Ms. Reilly has spent literally hundreds of hours stationed on the sidewalk outside our establishment, filming and accosting our patrons as they come in and out," said Berg'n co-owner Jonathan Butler, who also co-founded Smorgasburg and Brooklyn Flea.

Noise complaints have more than doubled citywide since 2011, to 420,000. A map of 2015 noise complaints shows higher concentrations in Crown Heights than Flatbush to the south and Brownsville to the East.

"I like gentrification. Because we're all supposed to live together and get along with each other," she said. As for Reilly, "She probably just has nothing else to do."

#Berg'n
#carnival
#noise complaints
#Pagwah
#west indian day parade
#original
Do you know the scoop? Comment below or Send us a Tip
A new Gothamist is coming! We’ve moved comments over to our beta site. Click here to join the conversation and get a preview of our new website.