Crown Heights Tenants Fight Court Ruling That Would Double Their Rent: "We Will Not Move"

Dozens of Crown Heights tenants and allies gathered for a candlelight vigil near the corner of Schenectady Avenue and Union Street last night, in solidarity with 55 families at 285 Schenectady and 1646 Union who will be evicted on October 1st—unless they agree to sign leases doubling, and in some cases tripling, their rents.

In August, after months of tenant organizing, the New York State Supreme Court ruled in favor of the tenants' landlord, Renaissance Realty Group, citing a loophole in the current rent laws that gives Renaissance the right to jack rents.

"I've been living in this neighborhood for 26 years," said Natasha Creese, who shares a three-bedroom at 285 Schenectady with three adult siblings, her 18-year-old son, and her five-year-old niece. "I grew up here. In 1989, you couldn't walk down Union in the middle of the day. I find it very unfair for Renaissance Realty to come here and say, 'Oh, your rent's jumped from $992 to $2,100.'"

"The landlord's exact words to me were, 'Do you know Crown Heights is the new Manhattan?'" she added. "He basically told me to get with the program or move out. I refuse to move."

The sudden and drastic increase in rent is due to the revocation of the tenants' preferential rent status. Set lower than the legal limit, preferential rent can be legally revoked on the occasion of a lease renewal.

Kerri White, the director of organizing and policy for the Urban Homesteading Assistance Board (UHAB), has been helping the tenants organize since last fall. "Preferential rents allow landlords to essentially put money in the piggy bank while they wait for gentrification to hit," she said in May. "They can turn on a dime and clear out the lower and moderate income people." 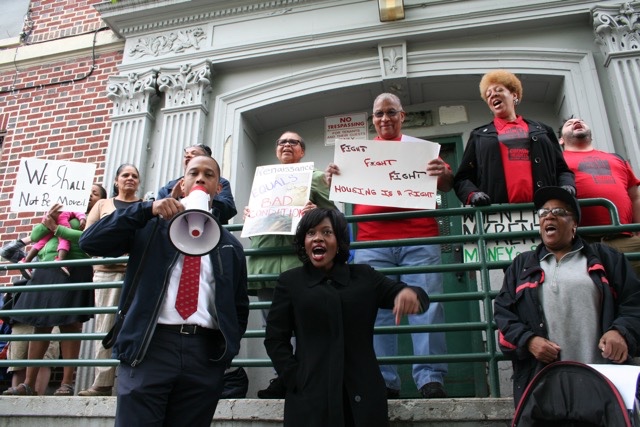 Tenants at both 285 Schenectady and 1646 Union were protected from such increases until 2008, thanks to a 1987 agreement between the building's then-owner, 285 Associates, and the NYC Housing Development Corporation. HDC paid $1.72 million towards 285 Associates' mortgage that year, under the condition that the buildings maintain affordable rents. That condition expired in 2008, well before Renaissance Realty purchased 285 Schenectady and 1646 Union for $10.7 million in April 2014.

Tenants at both buildings started fighting their new leases in housing court this spring. "When regulatory programs expire, the rent is legally set at the amount that tenants were charged the moment that the agreement ended," said Pavita Krishnaswamy of South Brooklyn Legal Services, who attended the rally on behalf of the tenants' attorneys, Veronica Cook and Sarah Telson.

But Renaissance argued in court that both buildings also benefited from a tax incentive program called J-51, instated in 1955 to encourage building owners to rehab, rather than abandon, residential buildings in struggling neighborhoods like Crown Heights. J-51 insures rent stabilization status, and under rent stabilization, the protections associated with the regulatory program are moot. The Supreme Court agreed.

"We are appealing against this extraordinarily wonky interpretation of the law," said Krishnaswamy. "Renaissance walked in saying that these apartments were really not stabilized, but when it came time to put pedal to the metal, they were like, 'Oh no these buildings are rent stabilized. They can't have it both ways. "

In the meantime, tenants across both buildings have been dealing with shoddy repair work. "There's mold, there's leaking, there's roaches, there's rats. It wasn't until we got the lawyers involved that the building sent a contractor to do 'repairs,'" said Simpson, making exaggerated air quotes with his fingers.

"They took up everyone's tiling in the kitchens and put down new tile. But that tile is coming up at the seams now. They replaced my kitchen counters, and now I can't pull out the drawer with the spoons because it wedges into the stove."

"Truly, we at the state level should not be setting rents for people in the city," she said. "If we were talking about property taxes rising, state legislators would identify. But we had legislators this spring who literally got up on the floor and admitted that they don't have one rent stabilized apartment in their district, so they don't know what we're talking about."

Holding up a megaphone, Creese looked out across a crowd of tenants from all over Crown Heights. "Today's me," she said. "Tomorrow's you."

We have reached out to Renaissance Realty for comment and will update if we hear back.