Fort Greene neighbors gathered on their brownstone stoops late Wednesday afternoon, watching hundreds of protesters march down the middle of Adelphi Street toward City Council Member Laurie Cumbo's office carrying signs that read "Kill the Deal" and "Your Luxury is Our Displacement." Some of the neighbors accepted flyers demanding that Cumbo withdraw her support from a controversial plan to redevelop a city-owned armory in her district.

Patrick Suer, 45, stopped on the sidewalk with his young daughter in tow. "This is the first time I've seen an actual protest in Fort Greene," he said.

Crown Heights residents, affordable housing advocates, and local labor unions have argued for months that developer BFC Partners' vision for the Bedford-Union Armory, located a few blocks from the coffee shops and boutiques of Franklin Avenue, will accelerate displacement in their neighborhood. The plan calls for a mix of market-rate and affordable apartments and luxury condominiums, as well as offices, community space, and a rec center featuring basketball courts, a swimming pool and an indoor turf field.

The apartments designated as "affordable" will be 50 percent below market rate, though just 67 units, out of a total 330, have been set aside for renters who make less than 50 percent of the Area Median Income, or $38,835 for a family of three. Meanwhile, neighbors worry that the proposed 99 apartments at 110 percent of the AMI—in addition to the more than 50 townhouse-style condos—will put more pressure on local rent-stabilized tenants who are already facing harassment from landlords.

"We know why homelessness is increasing," said Corey Bates, an organizer with the advocacy group VOCAL-NY. "It's simple: pretty developers are coming into our communities, building luxury housing, and making it too expensive for people to live in the communities that they grew up in."

Two challengers in this year's City Council election have demanded that BFC back out of the project entirely, making way for a 100 percent affordable housing project, potentially using the community land trust model. But Cumbo has said that she prefers to see the current proposal through, and negotiate improvements. In the last year, a controversial developer with ties to the Rivington House scandal severed ties with BFC. BFC also committed to launching an affordable housing fund for the neighborhood.

"Let's just continue to negotiate, see what the final outcome is, and if it's satisfactory," Cumbo told Gothamist in a phone interview in January. "If it's going to have a negative impact, then we vote it down and move forward." 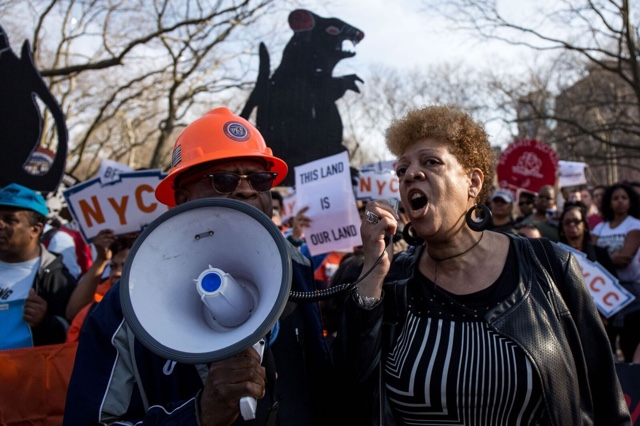 Gathering to march on the northeast corner of Fort Greene Park on Wednesday, dozens of labor union members surrounded Sam Spokony, a lone representative for BFC, shouting "Shame on you!" Service workers union 32BJ recently announced that the armory will employ union workers, and establish a job training program. However, BFC has yet to commit to union construction labor.

Spokony, apparently unfazed, retreated across the street to facilitate interviews with Geoffrey Davis, a lifelong Crown Heights resident and anti-violence advocate. Davis is planning to rent below-market rate office space in the complex.

"In Crown Heights we have this wonderful program called Jouvet, and violence happens every year," Davis said. "We have the opportunity to address that in one building."

"This approach of screaming and fussing and 'kill the deal' is absurd because we can't have this armory just sitting there empty for another 30 years," he added. "If that's the case, our prisons will grow with our young people, and our cemeteries will fill with our young people."

According to a BFC spokesman, the market-rate housing in the development will cross-subsidize the rec center, which will offer free or reduced memberships to Crown Heights residents (he did not provide specifics on the cost breakdown).

"Each job we undertake requires us to strike the right balance to ensure success for the project and achieve community goals that serve local families," he stated.

Donna Mossman, an organizer with the Crown Heights Tenants Union, challenged the argument that Crown Heights residents can only have a rec center with condos attached, particularly on land that is city-owned. "You're holding us hostage," she said. "What you are saying to us is, if you want the rec center, let us build one million dollar condos. And we're going to give you a rec center that you're going to have to pay to attend. Tell me how that's a good deal."

Mossman added that the city's continued support of the project is particularly frustrating in light of the drive to open new homeless shelters in Crown Heights. "They are building transitional homeless shelters to transition people to where?" she asked. "Nobody can live in Crown Heights. The tenants who are homeless are homeless because they cannot afford to pay $2,500 a month in rent."

Protesters chanted "Kill the deal!" outside Cumbo's Hansen Place office around 6 p.m., surrounding an advertisement truck broadcasting her image (the truck has been spotted around the district this week). After about 20 minutes, Cumbo's Chief of Staff invited five protesters upstairs. The group refused, instead providing business cards to set up a larger meeting at a future date.

"It was unfortunate to learn that our invitation to meet tonight was denied, as I hoped that we could have heard from the coalition leaders to keep communications open and flowing," Cumbo said in a statement to Gothamist.

#bedford union armory
#fort greene
#Kill the deal
#original
Do you know the scoop? Comment below or Send us a Tip