Desmond Atkins, a lifelong resident of Crown Heights, accused the Department of Homeless Services on Wednesday of continuing a legacy of racial discrimination by opening a men's shelter in his neighborhood—a part of Brooklyn that is majority black and, he believes, already saturated with similar facilities.

"People who look like me, or who speak other languages, typically are placed in neighborhoods and areas that are dumped upon," said Atkins, who is black. "This community was redlined when I was a child in the '60s and the '50s... This community should not be a dumping ground."

Wednesday night marked the second meeting in as many weeks about Bergen House: a new shelter for roughly 100 senior men ages 62 and older slated to open later this month at 1173 Bergen Street. Located on a residential brownstone block, it's the first of 90 new shelters that Mayor de Blasio hopes will reverse New York City's decades-long trend of steadily increasing homelessness. At the first meeting, a standing-room-only crowd drowned out city officials with chants of, "Shut it down!"

Demanding a fair distribution of shelters across the city, Crown Heights residents have tapped into an early criticism of City Hall's new strategy. In an effort to keep homeless families close to their communities—schools, churches, friends—new shelters will be distributed according to the number of people entering the shelter system in each neighborhood. A DHS spokesman called the approach "better for our homeless neighbors" who can "stabilize their lives faster."

But critics have countered that many of these neighborhoods are already saturated. They also tend to be less wealthy—and less white—than the city's shelter-free pockets.

According to a report this week from the Daily News, the five community districts with the most shelter beds—Jamaica and Hollis in Queens; Concourse and Highbridge in the Bronx; Brownsville; East New York; East Harlem—are majority black or Hispanic. For comparison, six of the seven community districts with zero shelters—Tottenville and South Beach in Staten Island, Bay Ridge and Bensonhurst in Brooklyn, and Forest Hills in Queens—are majority white. 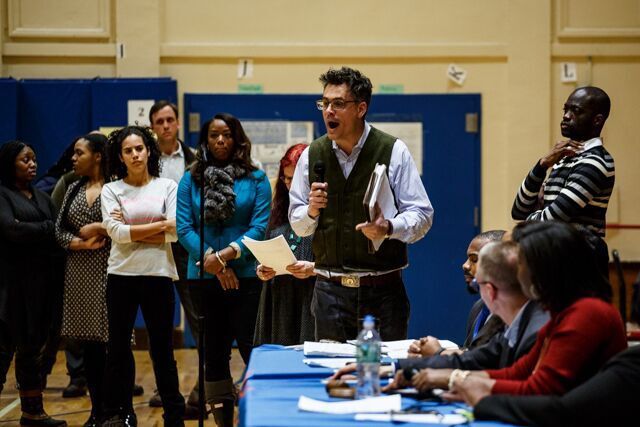 Alex Lawrence, 46, of Crown Heights raised his voice at the meeting, saying that the quick rollout of the shelter was disrespectful: "Why can you not engage with the community earlier?" (Scott Heins / Gothamist).

Many residents insisted on Wednesday that they were opposed to this disparity, not to helping homeless people on principal. "You come into poor communities, you buy up cheap buildings, and you house them in warehouses," accused Jennifer Catto, a Crown Heights resident of seven years and member of the Dean Street Block Association.

According to DHS, the city has plans to close five shelter sites in the community, with 80 people across them, before year's end. Another two sites will close over the course of de Blasio's five year plan, serving 220 people. Taking into account a second new shelter planned for the district, at 174 Prospect Place, the city estimates a net loss of 100 shelter beds over five years.

The city has also pledged to provide more notice ahead of any future shelter openings (Bergen House was confirmed in mid-February).

"I have trouble believing that that will be the case when time and time again I was the last one to hear," Council Member Robert Cornegy countered.

"Homelessness is a complex issue that has built up over decades," Isaac McGinn, a spokesperson for the Department of Homeless Services, told Gothamist earlier this month. "To meet immediate capacity needs, in the short term, shelters may be placed in communities that already have a significant number of shelters." 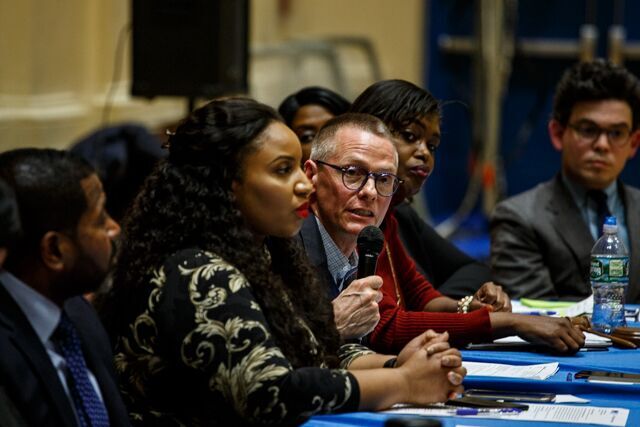 "In the past 20 years we've lost Interfaith Hospital and St. Mary's Hospital," said Gregg Todd, who's lived in Crown Heights since 1987. "Meanwhile, Park Slope Methodist is undergoing a huge expansion right now. Why are we putting homeless men where there are no facilities, when you have a brand new facility right across the park?"

Park Slope's community district six has 267 shelter beds, according to the city, compared to district eight's 679.

Several neighbors also said they were concerned about their safety, and overall quality of life. Gail Muhammad, 66, a Dean Street resident of 18 years, said she was frustrated with the takeout food containers she'd seen strewn outside the Bedford Armory men's shelter, two blocks from the Bergen location.

"Can you guarantee us that none of these men ever sexually abused somebody?" added Kimberly Riddick, 63, a Bergen Street resident of 31 years. "There's too many kids [in the neighborhood]."

Gordon Jackson, head of community affairs for shelter operator CORE Services Group, ran down a list of security measures, including cameras and regular neighborhood patrols. "If you see something happening, take a picture and send it to the number posted outside the shelter," he said. "We'll investigate it."

A small number of attendees expressed support for the shelter on Wednesday, referring to Mayor de Blasio's stated goal of keeping families in their communities (DHS clarified Wednesday that Bergen House will give preference to men from Brooklyn, not Crown Heights specifically). 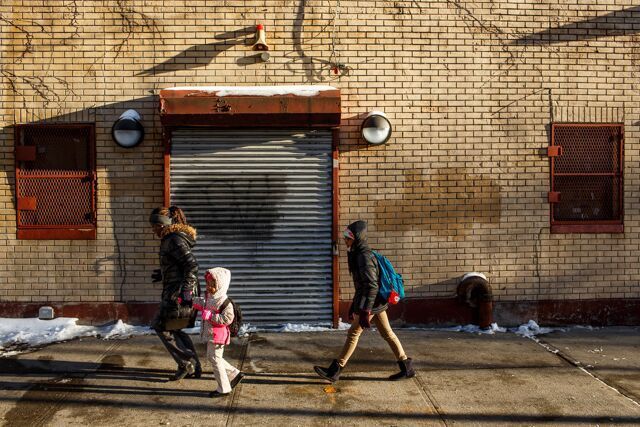 Dienane Fleurival, 29, works three days a week at Hebron Seventh Day Adventist Church across the street from the new shelter. A Flatbush resident, she said that gentrification is to blame for New York City's homelessness crisis, and accused the anti-shelter crowd of being complicit in this cycle.

"Why are people who are from the community, who cannot afford rent, being punished?" said Fleurival, who is black, prompting boos. "This is their community, too. Just because you guys pay $2,000 a month [in rent], why should we take it out on them?"

Catto, who is white, insisted that opposition to the shelter "cuts across race and socioeconomic status."

"There's a misconception that if you fight against a shelter you are against helping homeless people," Council Member Cornegy echoed. "You cannot defend saturation."

He closed the night with an allusion to gentrification, suggesting that long-time property owners deserve to reap its benefits. "They were here when no one wanted to be here," he said, to a standing ovation. "And now it's sexy to be here, and you're not respecting their property values."

#Bergen Street
#Crown Heights
#homelessness crisis
#original
#shelter
Do you know the scoop? Comment below or Send us a Tip

A mystery car is up for grabs in NYC. Let's try to find it.
Jake Offenhartz