Crown Heights Councilwoman: The Only Way To 'Cancel' J'Ouvert Is Martial Law

Faced with calls to severely restrict or even outlaw the predawn J'Ouvert celebrations that take place across Central Brooklyn every year on Labor Day in the wake of two fatal shootings during this year's festivities, Crown Heights Councilwoman Laurie Cumbo said that critics are proposing the impossible. For perspective, she explained, when she was growing up in East Flatbush, she went to J'Ouvert parties for the better part of two decades without even knowing there was an official parade.

Talking about simply canceling the event is maybe good political speak, but the reality of the situation is that J’Ouvert is a celebration that happens over the Labor Day weekend, and so when people talk about canceling it, there is far more that happens during J'Ouvert than simply the parade. People have backyard parties. They have barbecues. They have celebrations in their homes. There are celebrations that happen far beyond the parade route. There are nightclubs, bars, lounges, that also have parades and festivals. It's a time for people to be out and about all throughout Central Brooklyn. It's a very outdoor event.

The only way that I can imagine that you cancel it, if that's what we're seriously talking about, would be to impose a curfew, and maybe bringing in the National Guard, or martial law, and make it so people can't go outside of their homes the night before Labor Day. That's really what canceling it looks like.

And it sounds good to say cancel it, but J'Ouvert is a celebration that comes from many of the Caribbean islands. It's a celebration that has been going on here for more than two decades. There's so many things that happen that I think instead of focusing on J'Ouvert and Labor Day and those sorts of things—you can't focus on making one weekend out of the whole year the safest, because the ills that create gun violence all throughout the year are still in existence.

Cumbo's comments undercut the arguments of those who have said the tradition should be "canceled," including her counterpart in the state Assembly, Walter Mosley, as well as Crown Heights resident and NY1 host Errol Louis. Louis has been particularly vocal about the need to police the celebrations more like Times Square on New Year's Eve, or ban them entirely, saying that organizers of the official parade component and local politicians are evading responsibility for the violence that occurred during this and past years' parties by saying the problem is bigger than one night.

Mayor Bill de Blasio said yesterday he wouldn't rule out "canceling" J'Ouvert. Today he revised that, saying, "J'Ouvert will continue, but we're going to look for every conceivable way to make it safer."

Speaking about her hypothetical of a police state deployed to enforce a J'Ouvert ban, Cumbo continued:

It’s a lot of questions that we have to ask with all of this. And I take offense to conversations about the cowardice nature of this, the notion that politicians are too [cowardly]. We worked all over this year to make this the safest ever. As I look back on it, the focus shouldn’t have just been about Labor Day weekend, although that should have been a focus also. It should have been about addressing gang violence throughout the year. We have to come up with a strategy, not about J'Ouvert, but about how do we address the growing element of gang violence in the city of New York? 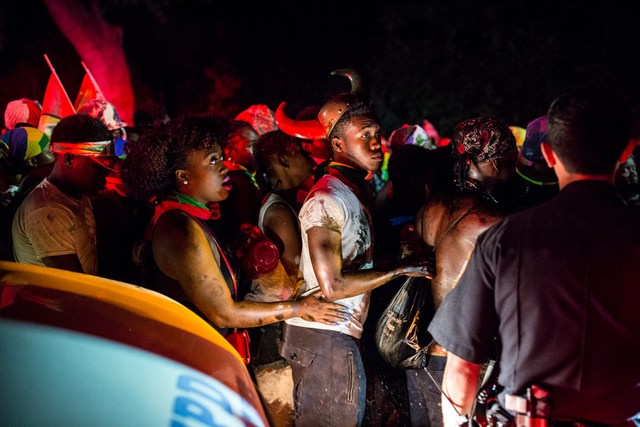 Recorded violent crime is hovering around an all-time low in New York City, and is down so far this year in East Flatbush, Prospect Lefferts Gardens, and Crown Heights, where much of the J'Ouvert and West Indian American Day Parade celebrations take place. Still, the area is one of the places where the city's pockets of gun violence persist, much of it driven by small street crews caught in cyclical beefs over territory, drug sales, and respect. Cumbo said that during a recent law enforcement briefing, she learned that Central Brooklyn is home to two dozen distinct gangs.

Cumbo said that she and colleague Councilman Jumaane Williams, who represents East Flatbush and has also pushed back on calls to "cancel" J'Ouvert, have helped to support a planned Mayor's Office arm focused on gun violence prevention, which would incorporate gun violence awareness and conflict resolution programming into school curricula, and fund mental health services for friends and loved ones of victims. She said that legislation needs to be passed to create the office, but that money has been allocated for it—she said she didn't know offhand how much.

Mayor de Blasio and the Council announced a similar effort in 2014, the Gun Violence Crisis Management System, to track gun violence and deploy social service providers and anti-violence mediators in certain high-crime precincts, at a cost of $12.7 million. The effort was put in place in East New York, but not East Flatbush and Crown Heights. (Revelers of Caribbean descent travel from around the city, the tristate area, and beyond for Labor Day weekend in Brooklyn.)

Cumbo said, as Williams has, that she coordinated with anti-violence mediators, clergy members, gun violence victims, and police to prepare for this year's celebrations.

On the specifics of how J'Ouvert could have been policed differently—this year the NYPD doubled its foot patrols to 3,400 officers, doubled its patrol vans to 50, more than quintupled the number of flood light stands to 250, set up cameras along the official parade route, and plastered the neighborhoods with flyers ordering the reader not to stab or shoot anyone—Cumbo declined to go into granular detail.

"If you look at the situation of this from what we understand of the shootings, they happened in front of police in very brightly lit areas," she said. "I don’t believe that the answer is more aggressive police presence. Maybe the answer is more preventative police tactics."

Pressed on what these tactics might be, she said, "I don’t want to claim to be a safety professional."

Former director of the Museum of Contemporary African Diaspora Arts, Cumbo was certain of this: the entertainment industry's portrayal of African Americans is hurting African-American kids' self-image.

We can create a lot of programs and job opportunities, but as long as young people feel that the gangster lifestyle is one they want to emulate, based on what they see on television and radio, and in the media, that’s a problem. That's something we've got to dismantle, because it's having a negative impact on our families; it's having a negative impact on our communities. No other culture has that. No other culture celebrates violence the way it's imposed upon us[...]Most young people in the hood want to be Ghost on the show Power rather than Barack Obama.

She added that the violence celebrated in most commercially successful rap music is narrowly prescribed, so that only young black men killing other young black men is allowed:

Young black entertainers are not allowed to sing about that about any other culture. You can only make those types of songs about our race, because no other race of people will tolerate that. I can't sing a song—and I'm not going to put any other racial groups out there, because I know that'll get twisted—you can't put out a song about any other racial or religious group and they'll accept that, or any profession.

By contrast, she recalled growing up watching the Cosby Show and A Different World and being motivated to apply to Spelman College by the on-screen exploits of Denise Huxtable on A Different World, where Huxtable attended the fictional Hillman College. Now, she said, "People are watching Power, Empire, How to Get Away with Murder, and guess what: that’s what people are going to want to do, too."

"It's just such a multi-layered issue," she said, adding, "We have to come up with a strategy, not about J'Ouvert, but about how do we address the growing element of gang violence in Brooklyn and the city of New York."

"Because if we don't address that, we just have to cancel life."

State Sen. Jesse Hamilton, whose district includes Crown Heights, Prospect Lefferts Gardens, and East Flatbush, hit many of the same notes in an op-ed his office is in the process of placing with a publication. The op-ed, provided to Gothamist, calls for "a comprehensive strategy to address this violence."

Hamilton wrote that he is open to security checkpoints "at key locations" in relation to the official J'Ouvert parade route.

More importantly, though, he wrote that mentorship, education, and job programs are key to ending violence among youths who are out of school and not working.

"When we think about responding to J’Ouvert violence, we ought to engage with the societal issues that interconnect with that violence," Hamilton wrote. "We need a comprehensive, holistic approach. We need to be sure that this violence is not repeated on Labor Day, or on any other day in New York."