"This proposal in its current form represents gentrification at its worst," Cumbo told reporters during a press conference ahead of her annual State of the District speech. "It is my goal to fight for the best interest of the people. I cannot in good conscience support a project with an economic model based on luxury condominiums. It's a non-starter, it's not a deal, we're not moving forward. My community deserves better."

Thursday's comments were Cumbo's most critical to date, denouncing Mayor de Blasio's intention to certify the plan on May 22nd in its current form, kickstarting the lengthy Uniform Land Use Review Procedure. She did not, however, call on the city to back out of negotiations with developer BFC partners, nor demand that the project be entirely below-market rate. Her most explicit demand was that BFC remove 58 luxury condominiums from the plan.

"I would not vote for a project, at all, unequivocally, with market rate, luxury condominiums," Cumbo said, adding, "We want to squeeze as much affordable housing out of this as possible, and I want it in writing. No wink, no handshake."

The century-old Bedford-Union armory was acquired by the city through eminent domain in 2013, and has since become a flashpoint for affordable housing advocates who argue that city-owned land is best suited for deeply affordable housing projects. BFC's vision will accelerate displacement in their neighborhood, they argue. The developer envisions a mix of market-rate and affordable apartments and condos, as well as offices, community space, and a recreation center featuring basketball courts and a swimming pool.

While the armory proposal as-written calls for 50 percent affordable units, just 18 out of a total 330 are currently set aside for renters who make 37 percent of the Area Median Income, or $31,068 a year for a family of three. An additional 49 apartments will be set at 50 percent of the AMI, or $38,835. Neighbors worry that the proposed 99 apartments at 110 percent of the AMI—in addition to the condos—would put more pressure on local rent-stabilized tenants who are already facing harassment from landlords. 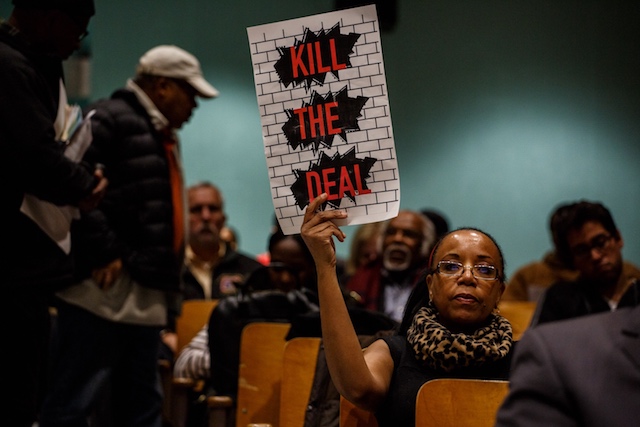 Strong opponents of the deal say they're still not satisfied (Scott Heins / Gothamist).

City Council members have approval power over rezoning applications in their own districts. For this reason, opponents of the project have recently targeted Cumbo explicitly. City Council members typically defer to the position taken by the member whose district a vote impacts.

The councilwoman has consistently demanded more affordability from BFC, but has maintained her willingness to negotiate with them. "I stuck it out as long as I possibly could because I knew what this space could do for this community," Cumbo said Thursday.

Two challengers to Cumbo in this year's City Council election have demanded that BFC back out of the project entirely, making way for a 100 percent affordable housing project. Some locals have called for a community land trust: a nonprofit that acquires and manages land and empowers tenants to jointly set the terms of its use.

But BFC critics said that Cumbo's announcement doesn't ensure the best outcome for Crown Heights residents living at or below the neighborhood's median income, between $41,867 and $44,961 for a household of three.

Cea Weaver is policy director for New York Communities for Change, a city-wide grassroots organizing group that has been actively protesting the BFC deal for months, demanding deeper affordability and union construction jobs for local residents. "The condo demand is really not enough," she said. "Fifty percent of the rental housing is still unaffordable to the neighborhood, and we are still doing it with this for-profit developer."

Weaver also referenced an Inwood rezoning plan that fell through when Councilman Ydanis Rodriguez pulled his support last August, in the face of strong community opposition. The next month, a developer backed out of a controversial project in Sunnyside, Queens.

City Hall issued a statement Thursday signaling its intention to keep working with BFC. "We respect the Council Member's views, but we don't believe this project can wait," said Economic Development Corporation spokesman Anthony Hogrebe. "We are working to bring a long-awaited community recreational center and badly needed affordable housing to Crown Heights."

BFC, meanwhile, stated that the project is contingent on 50 percent of the apartments being market rate. "The economic realities of cross-subsidizing a new rec center and the lack of housing subsidies mean that 50% affordability is the only option currently available at the Armory," said spokesman Sam Spokony.

NYCC, the Crown Heights Tenants Union, the Democratic Socialists of America, and other groups protested outside of Cumbo's State of the District Thursday evening, demanding that Cuomo vote against any further negotiations with BFC and #killthedealforreal.

@emma_a_whitford here's the scene at the Ingersoll comm. center where @cmlauriecumbo is due to speak. activists are continuing to demand she "kill the deal." pic.twitter.com/mnKPELZhM9

"Every time their project moves forward, our elected officials are betraying us," stated 66-year-old Vaughn Armour, an NYCC member and longtime Crown Heights resident. "This deal must be killed and it must be killed now."

DSA member Dave Hancock said that he believes protests in recent months have impacted the project "one hundred percent positively."

"Because of more than a year of really strong organizing [Cumbo] is coming out against a project that she once championed," he said.

Despite that, Hancock said, "The project will be closer to approval Monday than it ever has been."

#Bedford-Union Armroy
#Crown Heights
#Kill the deal
#laurie cumbo
#original
Do you know the scoop? Comment below or Send us a Tip