Becca Brennan, the 31-year-old owner of controversial Crown Heights bar Summerhill, told community members on Thursday night that she will not plaster over a pockmarked wall that she described as "bullet-hole ridden" in a recent press release.

"I mean, you see me try to talk and nothing I say will ever be good enough," Brennan told reporters.

Brennan agreed to participate in Thursday's meeting, which was organized by Geoffrey Davis, the local district leader. Davis called the meeting after attending a heated protest at the bar over the weekend, during which Brennan sat outside with a crossword puzzle and drink, occasionally shouting back and forth with protesters across a line of roughly a dozen police officers.

Protesters say Brennan is exploiting the neighborhood's violent past for profit, and some have accused her of racial insensitivity.

"I believe this store opened up with the deliberate intention of bypassing the longterm residents and targeting a different constituency, and therein lies the problem," said Joe Gonzalez, a longtime Clinton Hill resident.

Brennan issued a formal apology last month, in which she stated, "I recognize that I have more work to do." She removed Forty Ounce Rosé from her menu, but did not plaster over the debunked "bullet holes" which featured prominently in a photo promoting a $12 cocktail. 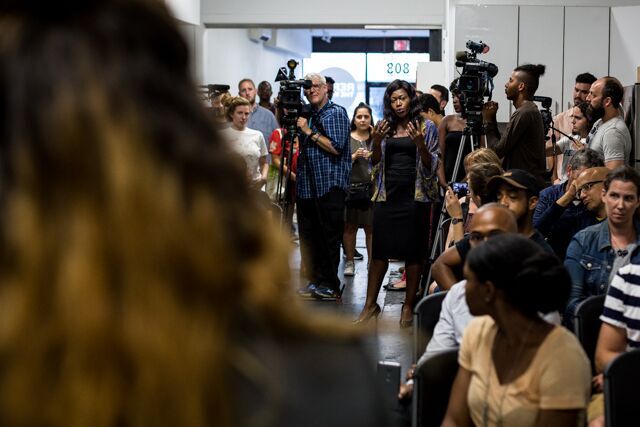 Brennan took the floor for a few minutes Thursday, after locals demanded to hear her side. "I opened a bar five weeks before this all started happening," she said. "I don't know if anyone had ever been there before you heard—and was told to be offended by my bar." She continued, describing the "bullet-hole" wall:

I loved it. I think it looks nice. People would come in and say, 'Are you keeping that wall?' And I said yes. And some people would say, 'Are those bullet holes?' And I never once to a person said, 'Yes, those are bullet holes.' They are obviously holes from anchors in the wall. That's where the soda fridge was when the bodega was there, ok?

So, I'm sorry I have a sense of humor, and... I was alluding to the fact that people asked if those were bullet holes and I was more trying to focus on the fact that I was keeping the integrity of this one hundred-year-old building, and trying not to cover up the history of my neighborhood and that corner. That's what happened, right? So there was no ill intention, there was no malice. And there was offense taken and I immediately apologized that that offense was taken. And you wouldn't leave me alone after that and it wasn't enough. You moved the goalposts.

"Do you have remorse?" asked Crown Heights resident Charles Joyner. "That's simple and straightforward: yes or no?"

"I'm very sorry that you were offended," Brennan said, as the room erupted.

"There's two kinds of apologies," said Xander Points-Zollo, 30, a DJ and Crown Heights resident. "There's, 'I'm sorry. What I did is offensive. Now I apologize.' Versus, 'I'm sorry that you got offended.' One of these is sincere and one of these isn't. And what I feel like we are hearing is the latter."

Crown Heights Assemblywoman Diana Richardson spoke midway through the event, expressing her displeasure with Brennan from the back of the room, by a row of news cameras.

"The truth is, your words say one thing but your body language and your attitude speaks very differently to us," Richardson said, adding, "The holes on the wall is offensive. People have died in this community. There's nothing about the architecture to protect, you know?"

Edmund Welch, 48, said he did not think about gun violence when he saw the wall. "What I do see... is a bunch of protesting and noise making and disruption of business," he said. "The type of thing I've grown to appreciate in the neighborhood."

"It takes a good deal of courage to even walk up to a crowd that's shouting in your face, so, thanks for that," said Rusty Zimmerman, Crown Heights resident and creator of the Free Portrait Project.

Others were much more rigid, including Michael Klein, 60, a white man whose comments about race drew a surprised "He went there!" from the crowd, as well as cheers.

"Let me tell you about humor," Klein said. "Let me tell you about what's funny. Because this is not just some idle joke or somebody that's got some quirky sense of humor. This is humor like... people gathering around trees pointing at people hanging there, and saying, 'Wow, that's funny.' This is humor like Birth of a Nation and looking at people in black face." 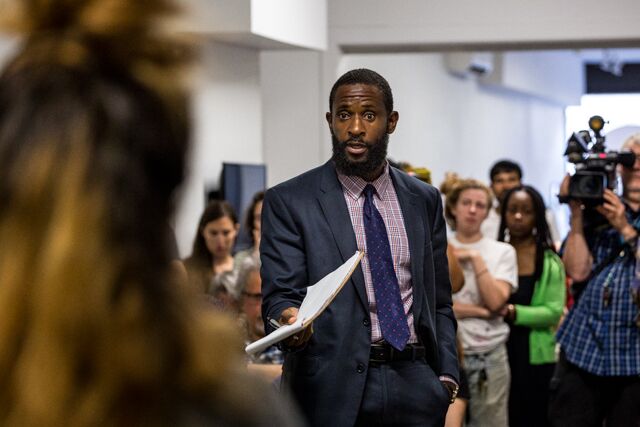 Davis, who attended Sunday's protest at Brennan's request, said that he would "sleep on it," and reach his own conclusions on the conflict. He confirmed to Gothamist that he will actively work to shut down Summerhill if the bar did not ultimately land in his favor.

Brennan pulled her bag onto her shoulder in the midst of Davis's closing remarks. She walked swiftly down the center aisle and made a few, quick comments to the news cameras, which rushed out with her.

"Do you think your business can survive this?" a Pix11 reporter asked.

"Yes," Brennan replied. "My supporters are at my bar right now waiting for me."

#becca Brennan
#bullet holes
#Crown Heights
#Summerhill
#Town Hall
#original
Do you know the scoop? Comment below or Send us a Tip