Becca Brennan, the owner of the controversial Crown Heights restaurant Summerhill, closed early Tuesday night to plaster over a pockmarked wall that mired the "boozy sandwich shop" in controversy in mid-July after she proudly described it as "bullet-hole ridden" in a press release.

Brennan, 31, initially told Gothamist the bullet hole comment was "cheeky," and clarified that the holes were not from bullets, despite the press release declaring, "Yes, that bullet hole-ridden wall was originally there and, yes, we’re keeping it." (She also subsequently removed bottles of Forty Ounce Rosé from her menu.) But her initial refusal to plaster over the debunked "bullet holes," which featured prominently in a photo promoting a $12 cocktail, angered many local residents who say Brennan is racially insensitive and exploiting the neighborhood's violent past for profit.

At a recent community meeting near the bar, Brennan argued that plastering over the wall would not prevent her detractors from simply "moving the goal posts." 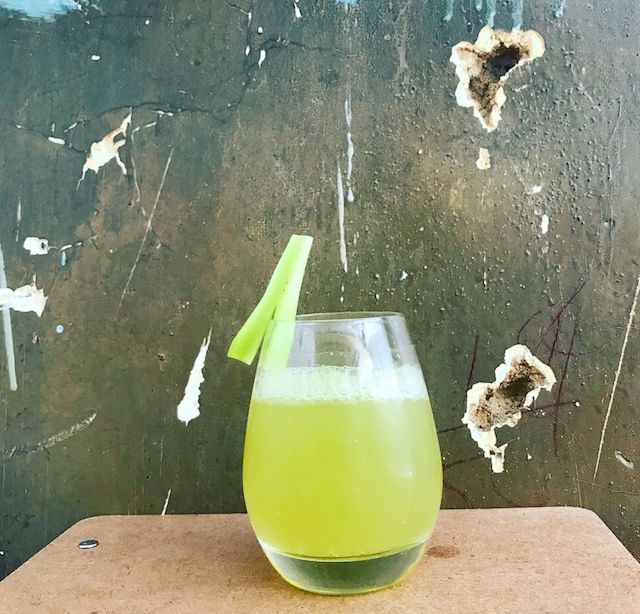 The wall, before plastering, as presented in Brennan's July press release. (Dan Sugrue for Summerhill)

A Summerhill bartender would not comment when asked about plans to plaster over the wall on Tuesday night around 9:00 p.m., and Brennan told a reporter to leave the bar as a man entered holding a ladder.

Around 10:30 p.m., a group of people could be seen inside the bar behind partially pulled-down grates. Photos show the plastering taking place around midnight.

Brennan has had some supporters throughout the controversy, including local business owners.

"It's the wrong cause," said Jamal Muhammad, part-owner of a nearby bodega, at a protest in July. "We had two shootings on St. Marks last year, and none of those bougie people show up."

Others have been critical, yet sympathetic. "It takes a good deal of courage to even walk up to a crowd that's shouting in your face, so, thanks for that," said Rusty Zimmerman, a Crown Heights resident and creator of the Free Portrait Project, at the August community meeting.

But many say they have been repeatedly frustrated with how Brennan has handled the controversy.

"Do you have remorse?" asked Crown Heights resident Charles Joyner at the community meeting. "That's simple and straightforward: yes or no?"

"I'm very sorry that you were offended," Brennan replied, as the packed room erupted.

"There's two kinds of apologies," said Xander Points-Zollo, 30, a DJ and Crown Heights resident. "There's, 'I'm sorry. What I did is offensive. Now I apologize.' Versus, 'I'm sorry that you got offended.' One of these is sincere and one of these isn't. And what I feel like we are hearing is the latter."

Protest organizers' initial list of demands included a public, spoken apology or press release from Brennan; the removal of the "bullet hole" wall; space, food and drink to community groups at a free or reduced rate inside Summerhill; and a commitment to attend meetings of the Crown Heights Tenant Union, a coalition of Crown Heights residents that has protested the proliferation of bars in the neighborhood and challenges landlords who harass tenants to hike rents.

"The act of covering a wall which was originally marketed as displaying 'real bullet holes' is purely performative and does not merit any level of praise," they said, citing her "continued dismissiveness at meetings."

"She may be able to cover up the holes, but she cannot undo the harm she has already caused," they added. "In light of this action, the organizers against Summerhill emphasize the boycott against this establishment."