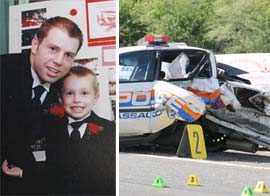 Today, a 6-year-old boy will finally see his father, a Nassau County cop who was critically injured when a drunk driver rammed into his cruiser a month ago. Newsday reports little Christopher Baribault, who has been "plead[ing] to see his dad," will go to the hospital today.

His father, Kenneth Baribault, had returned to his patrol car after pulling over a drunk driver on the Long Island Expressway when another drunk driver slammed into his car (one description: "The back of that patrol car almost meets where the driver was sitting"). An off-duty FDNY firefighter ran across six lanes of traffic to attend to Baribault, who later underwent surgery to relieve massive swelling in his brain.

Baribault's son has been begging to see him for four weeks, and now his family has tried to explain the situation to Christopher, who told Newsday, "He's not going to talk to me. I know that. He has stuff in his mouth, like tubes." Family members said Baribault, who was a former NYPD cop, said he had been working nights "so he'd be able to see Christopher on and off the school bus." The cop is expected to fully recover, but only after a lot of rehabilitation.

The incident prompted Nassau County Executive Tom Suozzi to publicize all drunk driving arrests over the Memorial Day weekend, a controversial move because Suozzi released names, addresses, and photographs of arrestees. Still, Suozzi considers the public shaming a good thing and has continued to release information about DWI arrests.