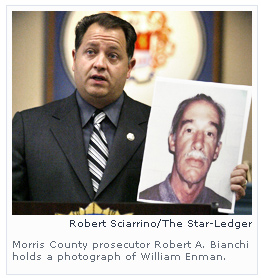 A man, who was found not guilty by reason of insanity after he beat his roommate and the man's 4-year-old son to death with a billy club in 1974, left the Ancora Psychiatric Hospital Sunday afternoon when he went on an unescorted stroll around the hospital's grounds. Sixty-four-year-old retired Marine William Enman admitted the killings in 1975, but was spared prison when it was determined that he was suffering from paranoid schizophrenia. Enman left the 80-acre property at Ancora during his Sunday stroll with camping gear and survivalist equipment. Now, authorities have expanded the search to Canada.

Unescorted walks were a court-sanctioned privilege accorded to Enman, even though he had escaped from hospitals twice before. Once he was found wandering the streets of the town in Morris County, NJ––about 40 miles west of NYC––where he killed Peter LeSueur and his son Eric. Previously, Enman actually had privileges to leave the hospital and visit people, but a judge reprimanded him for getting married and fathering a child while away. Those privileges were later revoked. During a prior escape, Enman was captured while in possession of a crossbow and marijuana. Officials at the NJ Dept. of Health Services and Morris County prosecutors are publicizing his picture and warning that he is a danger to himself and to others.

The Royal Canadian Mounted Police couldn't confirm their involvement in the search, but authorities do know that Enman purchased almost six acres of land in Nova Scotia recently. A Halifax newspaper reported that he bought the land valued at $7,600 for $1 from an Ontario company that specializes in hunting cottages. We're envisioning a Rambo-meets-One Flew Over The Cuckoo's Nest conclusion to this story.

UPDATE: William Enman was located and captured by State Police about an hour ago at 3 p.m. He was found dressed in camouflage in the woods behind the Ancora Psychiatric Hospital.

Picture and caption from NJ.com

#canada
#court
#death
#health
#hospital
#marijuana
#News: NYC
#nj
#nova scotia
#nyc
#once
#One Flew Over
#people
#police
#state police
#The Royal
Do you know the scoop? Comment below or Send us a Tip
A new Gothamist is coming! We’ve moved comments over to our beta site. Click here to join the conversation and get a preview of our new website.