Crazy Guys Love to Get Naked in Time Square 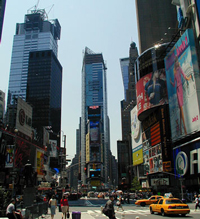 Just weeks after the New York Post milked a week's worth of coverage out of a 26-year-old's nude romp in the middle of the afternoon through Times Square, the paper heads back to the bare-naked well with yet another mentally disturbed male who wanted to lap the Square sans clothing. 44-year-old Antonia Alicata caught a Metro North train down to the city Thursday and then rode the subway to Times Square. Somewhere along the way, he shed his clothes and was caught on West 42nd St. by cops, as Alicata traversed the crossroads of the world without any clothes on.

Alicata has a history of mental problems and is currently being held at Bellevue Hospital. The man is from White Plains, NY and complained that he was "very tired." No charges are planned on being filed. No reaction was given in the New York Post article from the Naked Cowboy, who is a Times Square fixture who performs almost constantly and publicly in his underpants. Alicata said that forces behind his control "compelled" him to go for his naked stroll.

#bellevue hospital
#history
#hospital
#metro
#metro north
#naked
#naked cowboy
#new york
#new york post
#News: NYC
#nude
#subway
#the city
#Times Square
#train
#White Plains
Do you know the scoop? Comment below or Send us a Tip
A new Gothamist is coming! We’ve moved comments over to our beta site. Click here to join the conversation and get a preview of our new website.