"Crash, Not Accident": Hundreds March To Remember Those Killed By Drivers

About 200 people, dressed in bright yellow and carrying signs with the slogan "Crash, Not Accident," marched from City Hall Park to Dag Hammarskjold Plaza near the United Nations yesterday as part of the World Day of Remembrance, an international event commemorating those killed or injured in road traffic.

At least thirteen people have been killed by vehicular traffic in New York in the last three weeks, raising questions about whether the city-wide Vision Zero initiative is working. The recent deaths aren't such a departure from decades of New York City traffic deaths, said Paul Steely White, executive director of Transportation Alternatives, one of the organizers of the event.

"What's different lately is that people are now taking notice. People now understand that death and serious injury on our streets is not something we have to live with. The media is paying more attention."

Speaking to the crowd at City Hall Park, Mayor Bill de Blasio said the city is making progress, redesigning more than 130 streets and intersections, installing speed cameras, and lowering speed limits. "We've come a long way," the mayor said. "When you compare this year to two years ago, in 2013, if we had continued to lose people at the same rate as 2013, there would have been 92 more people lost."

But instituting the necessary design changes, like protected bike lanes, is still too often contingent on the whims of local community boards rather than being adopted as common-sense necessities, said White. 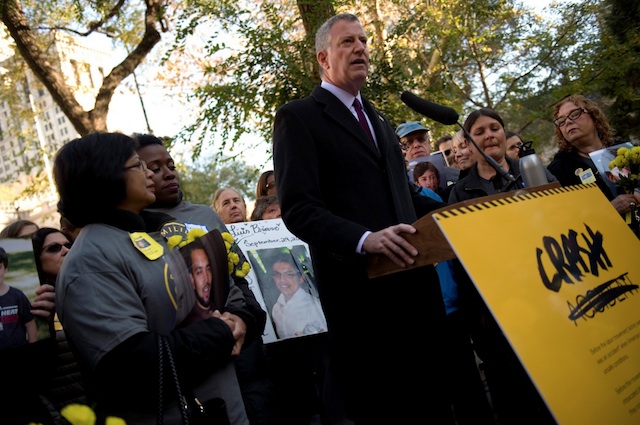 "This is still a very political issue," he said. "We're not yet there where these common sense improvements are done routinely, are done without asking for permission." He added that there's also much more the City can do on the enforcement side.

"The [NYPD Crash Investigation Team] is still only about 20 strong, so there are only a few on duty at any time. That means that if there multiple crashes, they can be spread very thin."

In addition, he said, police still often give quotes to the press exonerating drivers before investigations are complete, while newspapers then perpetuate the idea that these crashes are unpreventable "accidents."

Shawheen Hazrati, whose cousin's 9-year-old son Lucian Merryweather was killed by an SUV driver in 2013, said that while it's easy to focus attention on the drivers in fatal crashes, the problem is more systemic.

"It's not just the person trapped in the moment," Hazrati said. "It's a larger social question. We're all under pressure in this car culture. We all have to figure out ways to step back, to slow down."

The biggest challenge in reducing traffic deaths remains communicating the urgency of the issue to those who haven't lost a loved one, said Judy Kottick of Montclair, New Jersey, whose 23-year-old daughter Ella Bandes was killed by a bus at a notoriously dangerous intersection in Ridgewood in 2013.

"I think it's still hard for people who haven't been directly affected to take in the scale of the loss," she said. "For a lot of people, it's numbers, an unfortunate statistic, and the reaction is, 'Yeah, that's too bad.' I was like that too. But these are real families that have been destroyed."

#families for safe streets
#pedestrian safety
#vision zero
#original
Do you know the scoop? Comment below or Send us a Tip