Crane Company Did Use Damaged (But Repaired) Crane 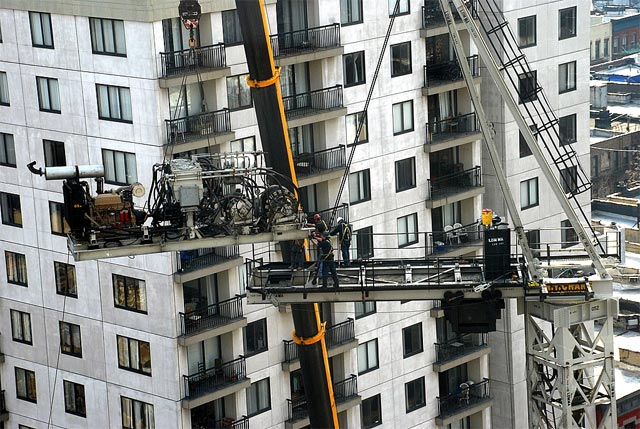 The offices of New York Crane and Equipment, which owns the cranes in last Friday's as well as March's fatal crane collapses, were searched and documents were seized, according the NY Times. Currently, there are investigations from the Manhattan DA's office, the Department of Investigation, and OSHA into the collapse.

An insurance company confirmed that the crane's turntable used at 331 East 91st Street was the same one that had been damaged at a West 46th Street job site last year. NationsBuilders Insurance Services president Bill J. Smith told the Times the crane had been repaired (pieces replaced and re-welded) and certified for use, but it's unclear whether the Department of Buildings allowed the crane to go back to work.

New York Crane and Equipment owner James Lomma has not commented to the media yet, so the Daily News looks what is known about the 62-year-old: He lives on Staten Island, has a 52-foot boat in the U.S. Virgin Islands, and is considered "humble" by neighbors. In related news, the construction worker whose chest was slashed open during the incident was discharged from the hospital and a funeral is being held today for Donald Leo, the crane operator, who was one of the two fatalities. The body of construction worker Ramadan Kurtij was flown to his native Albania for burial.