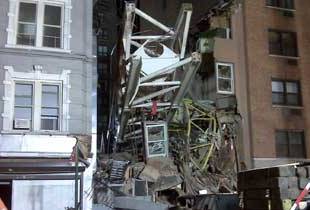 Two cats living in an apartment completely destroyed by the Midtown crane collapse have been found and reunited with their owners. The recovery of Mr. Gloves and Gooksie was in no small part due to the efforts of Gini Otway, a neighbor who also volunteers at the animal rescue and adoption organization City Critters.

As residents of buildings around the crane collapse were being evacuated, someone told Otway that they had seen a cat huddled on the steps of a nearby church. "When I picked him up, he was rigid, totally traumatized. He must have been just blown out of the building. It was like picking up a piece of wood." Otway, who took the animal to the ASPCA, suspected the cat belonged to Jean Squeri and Kerry Walker, residents on the top floor of 305 East 50th Street, the townhouse completely flattened by the crane (the pair were luckily not home during the crane collapse).

The cat found on the church steps was Mr. Gloves. It took another ten days for Gooksie to be located: Otway had postered the neighborhood and Gooksie was finally found cowering in a coal chute. The cats were reunited with Walker and Squeri, who are currently staying with Squeri's son.

The cats' recovery was a small bit of good news to emerge from the incident killed six construction workers operating a crane and a person visiting a 305 East 50th resident. The city is still investigating the incident, and the buildings inspector who falsely claimed to have inspected the crane two weeks prior has resigned.

#cats
#city critters
#collapse
#crane
#inspector
#quit
#rescued
#reunited
Do you know the scoop? Comment below or Send us a Tip