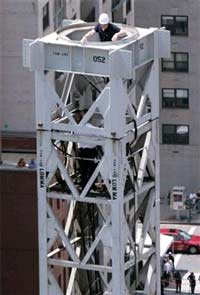 The Department of Buildings confirmed to the Daily News that it found cracks in a crane at a construction site in lower Manhattan. The crane happens to be a Kodiak tower crane owned by New York Crane & Equipment Co.--the same model and firm involved last month's fatal crane collapse at East 91st Street and First Avenue.

Cracks were found in the crane's turntable; the crane in the May collapse also suffered from cracking (it was also hit by lightning) but was repaired. The Kodiak tower crane is an older, discontinued model, and all similar models were immediately prohibited from being used at sites after the May collapse.

While the DOB told the News the cracks weren't compromising "structural integrity," the crane will be dismantled this weekend. Acting DOB Commissioner Robert LiMandri said, "We want to err on the side of caution."

#crane
#crane collapse
#crane safety
#department of buildings
#lawsuit
#manhattan
#upper east side
#Upper East Side crane collapse
Do you know the scoop? Comment below or Send us a Tip
A new Gothamist is coming! We’ve moved comments over to our beta site. Click here to join the conversation and get a preview of our new website.