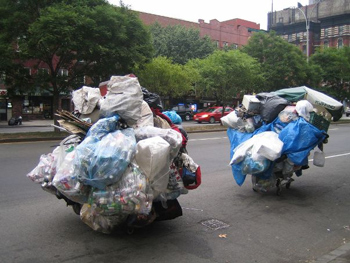 New York City is cracking down on the brazen theft of tons of goods that occurs right out in public, practically on a schedule. The Department of Sanitation noticed that the volume of recyclable paper it was collecting was down 2% from the previous year - and in parts of Manhattan's East Side, the decline in paper pick-ups was 25%. That prompted an investigation that found that out of state unlicensed haulers were sneaking into the city and grabbing recyclables the night before their regular pick-up was scheduled. Law & Order: DOS Recycling Unit!

The heft of the theft is quite large. According to The New York Times, city officials estimate that 15,000 tons of recyclables are being grabbed off Manhattan's curbs alone every year. At prices that can range from $15 to $30 a ton, the city could be losing $150,000 to $300,000 a year to unauthorized haulers. The City Council unanimously passed a bill this week that would impound trucks caught rustling trash off city streets and increase fines for a first-time offense from $100 to $2,000. Follow-up offenders would be fined $5,000. City Councilman Michael McMahon said, "The money we receive back for the paper, the metals in particular, helps pay for the program. So, the city's losing money by losing this paper."

Recycling is required from all NYC buildings; residents can recycle through the DOS but commercial businesses must hire.