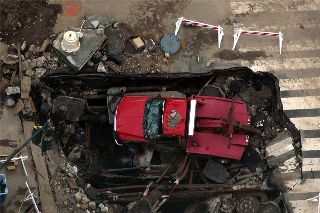 An engineering firm hired by the victims of Midtown steam pipe explosion say that there was a "crack-like flaw" in the pipe. Exponent Engineering's Robert Caligiuri wrote, "The observed crack-like flaw appears to be old and is large enough that, in my opinion, Con Ed should have detected it prior to the rupture. Once detected, good and accepted practices would have required that this pipe section be immediately replaced."

Naturally, Con Ed said the findings were incorrect and that it's actually a "weld" that "in no way contributed to the rupture." Last week, it was reported that Con Ed had filed a notice of claim against the city, in case the utility wants to sue the city at some point over the July 18 explosion. Con Ed says a water hammer is to blame for the explosion, the same phenomenon as the 1989 Gramercy Park steam pipe explosion that killed three.

You can read Exponent's report (PDF here). The lawyer for victims Gregory McCullough and Judith Bailey, a tow truck driver and passenger who vehicle directly on top of the explosion, Kenneth Thompson worried there may be other steam pipes being neglected by Con Ed: "We are concerned about public safety."

Photograph of McCullough's red tow truck by sidewalk_story on Flickr