The two explosions near the end of the Boston Marathon killed three and injured over 130 people. One of the most gruesome injuries photographed was that of a man whose legs were blown off.

Many of the distressing and graphic images have been posted here on Reddit—WARNING, they are EXTREMELY GRAPHIC. The man wearing a cowboy hat who helped and tried to stop the bleeding is Carlos Arredondo, who has protested against the war after his 20-year-old son died during his second tour as a marine in Iraq. He can be seen at around 1:50 of this video from the Boston Globe, trying to pull wreckage off people: 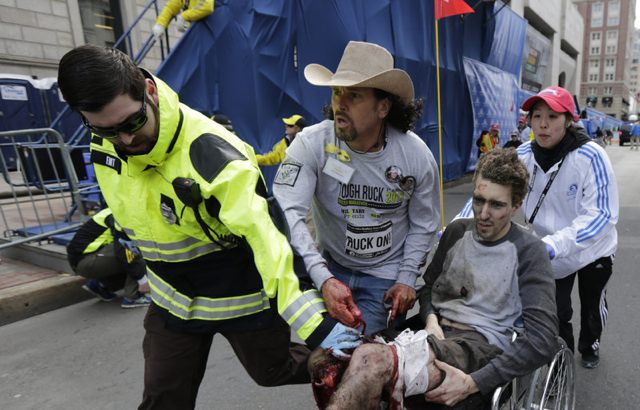 Arredondo and his wife, who live in Bangor, Maine, were at the marathon because five people were running in honor of fallen soldiers from Maine, including Alexander Arredondo. Carlos Arredondo had been passing flags to a National Guardsman who finished the race when the bombs went off. Soon, Arredondo would be using a flag to stop the bleeding, as seen in the AP photograph at right. He said he told the runner, "Stay with me, stay with me."

That's my friend Jeff in the wheelchair. This is the latest update I have on him. Google Person Finder says he is alive but for all I know someone saw this and reported him as alive. Carlos Arredondo should never have to buy a drink in this town again.

EDIT: I didn't realize I could dive into the Google People Finder results. He was in the Boston Medical Center ER as of 23:20 UTC. Here is a photo of him from his facebook for verification: http://imgur.com/iL68E0w

EDIT 2: Received word via facebook that he is in stable condition. Thanks all for sending him thoughts and well wishes.

Arredondo also described the blast to reporters, saying that he rushed over and started bringing people to the medical tents (see video below and this video from NECN):

His wife Melida notes how her husband is still shaking from the event and asked the question on everyone's mind, "Why?"

Some history about Arredondo: He was so upset when the Marines informed him of his son Alexander's death in 2004, he doused the Marines' van with gasoline and also happened to (apparently) accidentally light it on fire with himself in it. Badly burned, he wasn't charged and went to his son's funeral on a stretcher. Arredondo, a Costa Rican emigrant, became a U.S. citizen in 2006.

In 2007, he erected a memorial to his son, including a coffin, in Times Square, telling the NY Times, "Every day we have G.I.’s being killed, and people don’t really care enough or do enough to protest about how the war is going. Some people say I’m dishonoring my son by doing this, but this is my pain, my loss.”"

#boston marathon
#boston marathon explosions
#carlos arredondo
#hero
Do you know the scoop? Comment below or Send us a Tip
A new Gothamist is coming! We’ve moved comments over to our beta site. Click here to join the conversation and get a preview of our new website.