On May 18th, 2015, Con Edison shut off cooking gas to all 159 co-op apartments at 161 West 16th Street, a pre-war brick building on the corner of Seventh Avenue described by StreetEasy as "one of the most prestigious and highly sought-after co-ops in Chelsea." More than eight months later, 49 of the apartments are still without gas.

Barneys is slotted to debut its new flagship location on the building's first four floors next month. And while the department store denies any responsibility for the gas issue—the company says that Con Ed discovered a "unauthorized pre-existing gas line" in the basement during a routine inspection last spring—many residents of 161 West 16th Street say that their quality of life took a dive when Barneys started construction work early last February.

"The reason for the building's gas shutdown remains unclear, and we do not expect to ever really know [what happened]," read a notice from the co-op board slipped under doors throughout the building last night. According to residents, this is the first time the board has formally acknowledged the issue, aside from a few elevator notices last May that blamed, variously, Con Ed and "a misunderstanding between plumbers working for Barneys and Con Ed."

Routine inspections following the shutdown revealed that 35 apartments have leaks in their gas lines, and 14 others have defective piping that's not up to building code. Although Barneys "isn't accepting responsibility," the board said the department store agreed to cover the cost of restoring gas service and "most" repairs, at an estimated cost of $500,000. Repair work should be done "shortly."

For some residents, apartment work has been stalled and partial. Daniel Discroll, an art director at an ad agency, says that building manager United Management sent workers to dismantle his kitchen cabinets in October, apparently to access the pipes and assess possible damage. Now one cabinet stands in the living room, and the second is hanging precariously over the refrigerator. 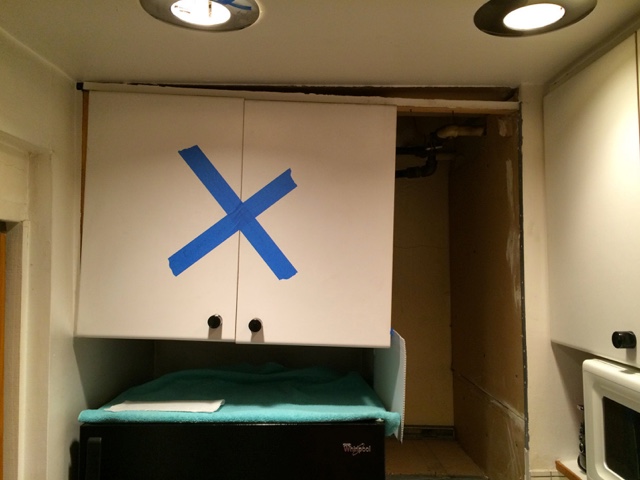 A cabinet that has been hanging loose in Driscoll's apartment since October (via Daniel Driscoll).

Driscoll and his partner Ed Chiquitucto sent a letter to the board last November demanding an explanation, to which they say there was no response. "Barneys went in and started construction and the next thing we knew we had lost our ability to cook," Driscoll said this week. "We've had to makeshift cook like we're dorm students and we have piles of pots and pans in our 500 square-foot apartment," he added.

"There is no scenario explaining why a luxury co-op in Chelsea should go without gas for almost a year," said Yetta Kurland, an attorney and resident since 1999. Here, apartments sell for $635,000. (As one resident put it to CBS over the summer, "I mean, in all honesty in this building, a lot of people don't cook.")

Kurland says that she and her neighbors pay "tens of thousands" annually for repairs, utilities, and general maintenance of the common spaces. 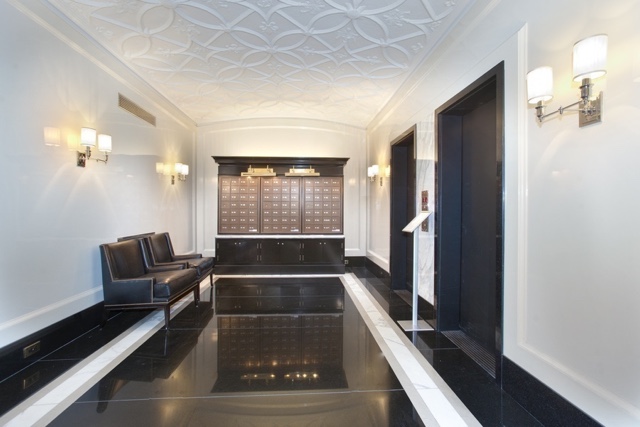 Con Ed confirmed this week that utility workers were in the building to discuss future gas work on May 18th when they noticed an "unauthorized connection providing cooking gas to the apartments above." Because the Department of Buildings had not certified the work, Con Ed shut off gas to the entire building. (A deadly gas explosion had killed two people in the East Village less than two months prior.)

While Con Ed waits on a certified plumber to install new gas lines in the impacted apartments, Barneys places responsibility on the co-op.

Kurland says that she voiced her concerns about the gas at the annual share-holders' meeting over the summer. "The board just sat there and said how wonderful Barneys was doing," she said. "They... seem strangely subjugated to the issues of Barneys rather than being the advocates to the members of the co-op."

"I hold everyone responsible," she added. "If you're a multi-billion dollar company, make sure you're not harming the tenants in your building, and if you're a board representing tenants, stand up for their rights."

In its letter to residents on Thursday, the board said that litigation against Barneys was "not in the building's best interest," and that to compensate co-op members out of the co-op's own reserves would "effectively [mean] paying ourselves."

"Barneys sympathizes with all affected tenants and looks forward to a long and mutually beneficial tenancy in the building with all of its residents," said a spokeswoman for the company.

#barneys
#con ed
#gas
#takeout
Do you know the scoop? Comment below or Send us a Tip