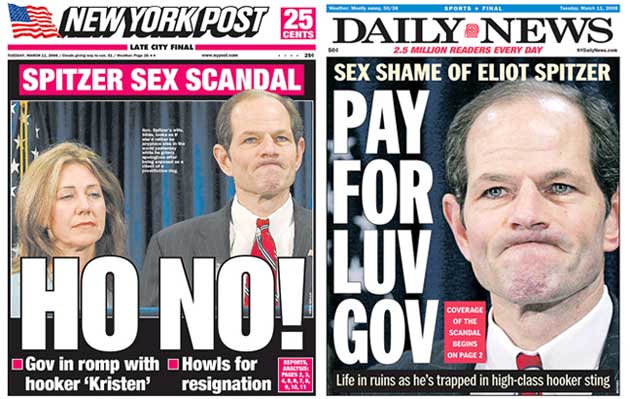 Newspapers all over the country are paying close attention to the stunning news that Governor Eliot Spitzer paid for a prostitute - and was apparently a regular client - to "visit" him from NY to DC. Our local papers all take a shot at the former crusading Attorney General who rode into the Governor's Mansion on a promise of reforming Albany.

The Post calls him "NY's NAKED EMPEROR" and demands he should resign. After reminding everyone of Troopergate, the Post writes, "Eliot Spitzer owes his wife and family an apology - but he owes the people of New York a great deal more. His resignation. Now."

The Daily News says, "Hit the road, john": "Three words to the man: Just get out... You cannot at once be governor of New York and Client No. 9...after only 14 months, the governorship of Eliot Spitzer is chalked up as a failure. He has but one official act left: resignation." The News is also worried about all the important matters on Albany's plate, number one being the budget in this year of belt-tightening. 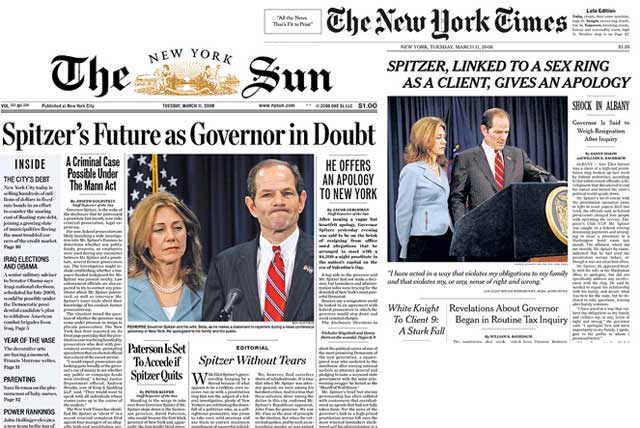 The NY Sun says Spitzer's "governorship [is] hanging by a thread because of what appears to be a reckless, even ruinous run-in with a prostitution ring" and the paper finds itself "shorn of schadenfreude." The Sun adds, "If there is a bright spot to this sad story, it is that it may hasten the revival of a Republican Party in New York that can offer both an issues-based and ethics-based contrast to the leadership represented by Messrs. Spitzer, Silver, and Paterson."

The NY Times editorial is angry. After faulting his statement for being too brief and arrogant, and bringing up his history as "the Sheriff of Wall Street" and "a self-appointed Mr. Clean" in Albany, the Times believes, "Mr. Spitzer did not seem to understand on Monday what he owed the public — a strong argument for why he should be trusted again. The longer he hesitates, it becomes a harder case to make." 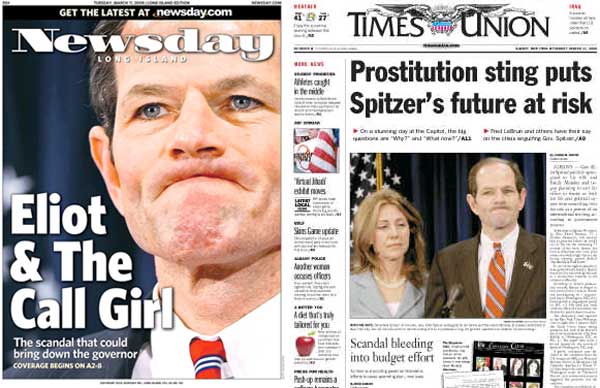 Newsday's editorial: "Of course, the governor has to resign. Fifteen months ago, he was the chief legal officer of the state. Hiring a call girl was not only against the law, but procuring her to cross state lines turned the $4,300 evening into a federal crime. Spitzer, 48, is either viciously self-destructive or pathologically arrogant, believing he wouldn't be caught."

Albany's Times Union is also skeptical of Spitzer's "apology" yesterday, saying it was a "cowardly performance," "A prostitution ring, Mr. Spitzer? "Client 9" of the Emperors Club VIP? Explain yourself, quickly and completely." 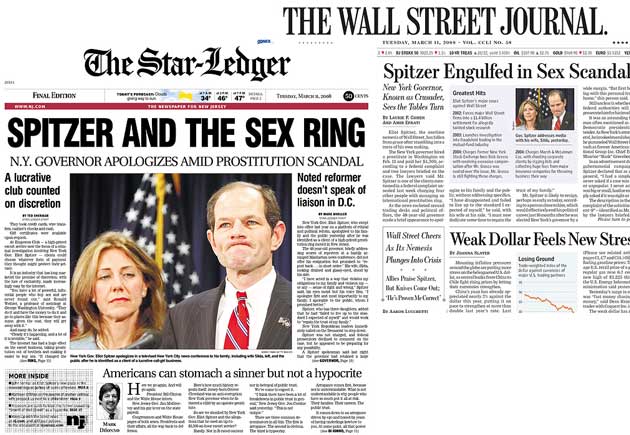 The Wall Street Journal brings up Spitzer's battles of Wall Street figures in its editorial, which begins, "One might call it Shakespearian if there were a shred of nobleness in the story of Eliot Spitzer's fall. There is none. Governor Spitzer, who made his career by specializing in not just the prosecution, but the ruin, of other men, is himself almost certainly ruined." The WSJ says "people, in turn, deserve prosecutors and officials who understand the difference between the needs of the public good and the needs of unrestrained personalities who are given the honor of high office."

The Star-Ledger's Mark DiIonno finds commonalities between Spitzer and Bill Clinton, Jim McGreevey, and other politicians: "There are three common denominators in all this. The first is arrogance. The second is obvious. The third is hypocrisy."