A 2017 spike in Immigration and Customs Enforcement arrests in New York City courthouses is scaring immigrants who might otherwise attend a scheduled court appearance or seek legal assistance, according to a coalition of public defenders and advocates. While the NYPD's sanctuary city policy limits cooperation with ICE, the federal agency can appear unannounced in city courts, where vulnerable clients' names are clearly posted.

"They're coming in for convenience to identify people with or without a warrant," said Hamra Ahmad, director of legal services at Her Justice, which represents indigent women, including mothers seeking child support and victims of domestic abuse. "That's definitely been an increase since the Obama Administration."

There have been 38 arrests and attempted arrests at courthouses in New York State since the beginning of 2017, according to the Legal Aid Society. Of those, 19 arrests and nine attempts have taken place in New York City. The Legal Aid Society could not immediately supply arrest statistics for previous years, though a spokesman said the last six months have seen "more reports of ICE arrests than we have for the past two years combined."

"People become sitting ducks," said Terry Lawson, director of the Family and Immigration Unit at NYC Legal Services's Bronx Office. In addition to defendants charged with a crime, she described tenants now hesitant to file actions against their landlords in housing court, and single parents unwilling to seek child support.

Leigh Latimer, a supervising attorney with the Legal Aid Society who represents clients charged with prostitution, was in human trafficking intervention court in Queens last Friday when ICE agents attempted to arrest a client. The incident quickly became a rallying cry for attorneys and immigration advocates, as the court was implemented to vacate charges and offer alternatives to incarceration.

"For ICE to come in and detain people who may be victims of trafficking, who may have immigration remedies available to them, without giving us notice or investigating what their status could be, it's very scary," Latimer said. "We were stunned."

The woman had overstayed a tourist visa, Latimer said, and was in court to have two misdemeanor charges vacated. When the attorney realized that ICE was present, she asked the judge to detain the client (since ICE officers can't remove an individual from court custody). By a feat of legal gymnastics, Latimer and her colleagues managed to shield the client until ICE agents had left the building.

This week, intervention court clients were buzzing about the incident at a know-your-rights session. "They spent the whole hour talking about, and worrying about, immigration," Latimer said.

An ICE spokeswoman said that three people were arrested outside of Queens Criminal Court on Friday June 16th, and that no arrests were made in trafficking court. 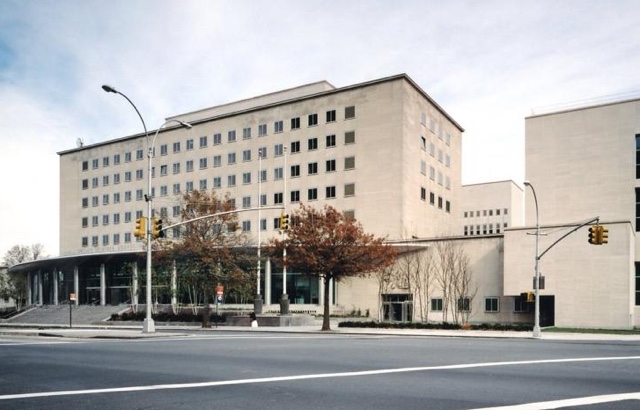 Advocates are now putting pressure on the New York State Office of the Court Administrator, which sets guidelines for all state courts. City Council Speaker Melissa Mark-Viverito announced at a Thursday rally that the Council has invited that office to a Courts & Legal Services Committee hearing next week to discuss reports of ICE overstepping in the courts.

The office of Chief Judge Janet DiFiore did not immediately respond to a request for comment on today's rally, though DiFiore told WNYC that she was "greatly concerned" about the Queens intervention court incident. "In a continuing dialogue, we have met with federal officials on a local and national level to convey our concerns and request that they treat courthouses as sensitive locations, similar to schools, hospitals and places of worship," she added.

ICE declined to comment on today's press conference directly, but outlined when ICE believes intervention in a courtroom is necessary. ICE guidelines currently direct agents to avoid certain "sensitive" locations, but not courts. The spokeswoman said that courthouse arrests are "generally" reserved for cases where other options have been exhausted.

DiFiore has not joined chief judges in New Jersey and California, who have written the federal government urging ICE to stay out of courthouses.

"This idea of having more conversations with ICE obviously isn't working," Mark-Viverito said Thursday. "She [DiFiore] needs to be more bold."

Attorneys have offered suggestions. "When ICE is in the courtroom, tell us so we can advise our clients," Tina Luongo, attorney-in-charge of the criminal practice at the Legal Aid Society, suggested. "At a minimum, just tell us."

Advocates for police reform argue that New York City could also protect vulnerable populations by cutting off the channels that feed the courts. In particular, ceasing arrests for low-level and quality-of-life offenses that disproportionately impact low income communities of color: marijuana possession, trespass, turnstile jumping, sex work. Recent reports show that the majority of arrestees for turnstile jumping and prostitution are people of color.

The NYPD recently pledged to focus its arrests on pimps and johns, rather than sex workers and victims of human trafficking. Arrests have persisted, though reports suggest they may be on the decline.

"We think that people in prostitution should not be arrested but buying sex and trafficking and selling sex should continue to be a crime," said Judy Kluger, director of Sanctuary for Families, a proponent of Queens intervention court.

#ICE
#immigration
#Intervention court
#original
Do you know the scoop? Comment below or Send us a Tip