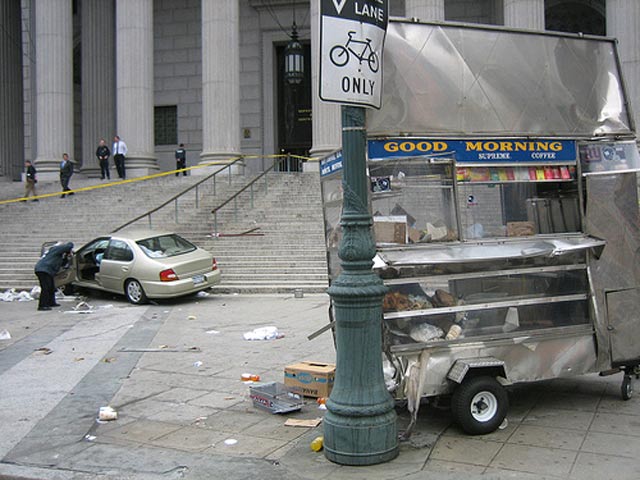 Photograph above and gallery by Phil Ritz on Flickr

Police have charged the driver who mowed down pedestrians outside the State Supreme Court with "reckless endangerment and aggravated unlicensed operation, for having a suspended license." Though 33-year-old Queens resident Lorenzo Bello had a seizure during yesterday's morning crash, it wasn't his first. Per the Daily News, "His wife told cops he has a history of seizures and shouldn't be behind the wheel."

Six people were injured when Bello's Nissan Altima jumped a curb and barreled onto the sidewalk and up the steps of the iconic State Supreme Court. The car hit a fire hydrant, then Jaweed (Joe) Naseri's coffee cart. The car also hit two female pedestrians before pinning 33-year-old Max Verline against the courthouse steps' railing.

Verline suffered a broken leg and Naseri had a broken nose, while the women were treated for their minor injuries. One, Marilyn Hom, told the NY Times as she iced her knee, “I was at the breakfast wagon.The car came by and went out of control. I was ordering when it hit. I fell down on the sidewalk when the car came by.”

The charges against Bello, who was injured as well as his wife, are felonies. And given that Centre Street is an exit right off the Brooklyn Bridge, some court officers said "they were surprised that even more accidents didn't occur in the area because of the speed at which some cars come off the span."

Thankfully no one was seriously hurt, but if Bello's license was "yanked for good" (Daily News) last summer, what's to keep him--or other suspended license holders--from driving?