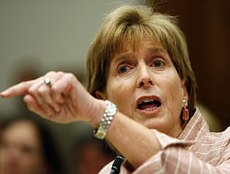 Back on September 18, 2001, Whitman issued a statement saying, "Given the scope of the tragedy from last week, I am glad to reassure the people of New York and Washington, D.C. that their air is safe to breath and their water is safe to drink." Of course, there was toxic dust and a group filed a class action suit against Whitman for making such claims.

Per the AP, the appeals court found "legal remedies are not always available for every instance of arguably deficient governmental performance." (But then how does government change?) When Whitman had testified in front of Congress last year, she said, "There are people to blame. They are the terrorists that attacked the United States, not the men and women of all levels of government."