Court to NY Travelers: You Have No Rights 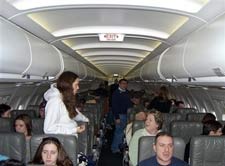 A state law proposed to offer airline passengers trapped aboard grounded planes at New York airports a baseline of humane treatment (e.g. water, air, bathroom facilities) was struck down by the 2nd Circuit U.S. Court of Appeals today. The New York Airline Passenger Bill of Rights was enacted after some high-profile incidents that had passengers stuck aboard delayed flights for hours, with overflowing toilets and no food or drink.

New York State was a practical place for such legislation to originate as the state's three largest regional airports--Newark, Laguardia, and JFK--lead the list in flight delays and congestion. Sen. Chuck Schumer, a longtime critic of the FAA, has gone as far to call for the resignation of the head of the FAA, given the pathetic state of NY air travel.

The Court of Appeals ruled, however, that since airline travel is primarily an interstate affair already regulated by the federal government, it would be inappropriate for states to begin enacting a patchwork of laws of their own making. U.S. Senator Chuck Schumer: the ball is officially in your court.