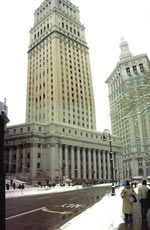 Though a long-time custom in West African countries, a federal appeals court in NYC will rule whether genital mutilation is grounds for granting women asylum in the United States. According to the NY Sun, three women will be serving as a test case regarding whether the cultural custom--and their opposition to such a practice--is sufficient grounds for asylum in front of the 2nd Circuit Court of Appeals in Manhattan.

Mutilation is a loaded term: Proponents of what is known as the clitorectomy claim that it promotes virtue in females by removing the possibility of sexual satisfaction. The procedure itself is rather brutal and often done without anesthetics. However, one of the woman fighting deportation, Salimatou Bah, says after undergoing the procedure at age 11, she suffered "medical and sexual complications."

Attorneys for the U.S. don't think women who have already been subjected to female genital mutilation have a claim for asylum, since the procedure "cannot be repeated in the future." The three women are also arguing they will be persecuted for their opposing political beliefs (Bah was previously jailed--and raped by guards--for her political beliefs).

Federal courts and the Board of Immigration Appeals have recently also been butting heads over the matter--the courts view it as a bellwether for future persecution, while the BIA views it as a one-time event that prevents further violations.