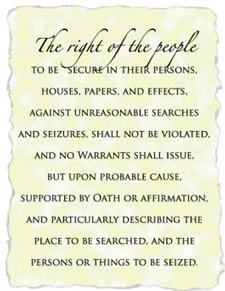 In a decision that sets a new standard for what constitutes a legal search by police, as well as serving to remind why doing crack is a terrible idea, The New York Court of Appeals ruled that "reasonableness" should remain the touchstone for searches in order to not violate the 4th Amendment protection against unreasonable search and seizure. Defining reasonableness was the basis of the case in question, which involved the searches of body cavities. The NY Times summarizes:

The case before the court involved Azim Hall of New York, who was arrested on Feb. 8, 2005, on charges that he sold two pieces of crack cocaine outside a grocery store. After his conviction, Mr. Hall filed an appeal, arguing that the police had conducted an illegal search by pulling a string, attached to a plastic bag containing crack cocaine, that was dangling from his rectum. A State Supreme Court judge dismissed the indictment, but the Appellate Division reversed that.

The most recent decision said that the State Supreme Court was correct in its initial finding and that pulling the string attached to the bag of crack secreted up a dealer's ass was an unreasonable search. To pull the string, a warrant is required.