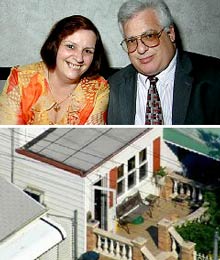 The Post reports that the police are investigating it as a double homicide, but "detectives had not entirely ruled out the possibility that it was a murder-suicide" (the murder weapon was not found). The Daily News says investigators are looking at business associates, plus the couple may have been "about to fire someone in their office."

There were no signs of a break-in, and neighbors didn't hear any loud noises, except for some some banging around 5 a.m. Also, neighbors expressed surprise that the couple's German shepherd didn't bark, with one telling the News, "It must have been someone the dog knew. Every time you pass there, he jumps up at the door."

A police source said, "Whoever did this knew them, came right in, did it and fled. Marine Park doesn't have to worry about double-locking their doors. This was no push-in robbery."

#brooklyn
#HOMICIDE
#marine park
#murder
Do you know the scoop? Comment below or Send us a Tip
A new Gothamist is coming! We’ve moved comments over to our beta site. Click here to join the conversation and get a preview of our new website.