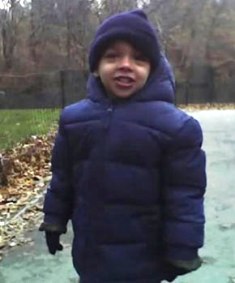 The godmother of a 3-year-old boy and her boyfriend reportedly admitted to prosecutors that they beat the child, who died on Friday. However, Nymeem Cheatham and Lemar Martin, who are being held without bail, did not confess to killing Kyle Smith, who was found with cigarette burns, bruises all over his body, a torn tongue, a broken pelvis, and signs of sexual abuse.

Back in 2007, when Cheatham petitioned for custody of Kyle (his mother left him with her), the Administration for Children's Services found Cheatham's "house in order and the child happy and healthy." But it turns out that Cheatham was wanted in Texas for abusing her biological children, ages 4, 5, 9 and 13. An ACS spokesperson said the agency couldn't have known, "There is no national child-welfare database. We can only run records through the New York state child database." And ACS has no record of a complaint from Smiths' paternal grandmother or the police that was allegedly made in February.

Kyle's father, Elliott Smith, is devastated, according to his mother who spoke to the Daily News: "He's in mourning right now. He's not doing very well at all, but he's hanging on." The News adds, "it was unclear why Smith did not claim his younger son" and that Smith could not be reached.

#ACS
#Administration for Children's Services
#child abuse
#child endangerment
#death
#finger-pointing
#Kyle Smith
Do you know the scoop? Comment below or Send us a Tip