A small flock of domesticated ducks were rescued from Rockville Country Club on Long Island earlier this month amidst allegations that the club's head groundskeeper was attempting to starve them to death.

Animal rights advocates were alerted to the ducks' condition by three other groundkeepers at the club, who had begun finding dead ducks littered across the mostly deserted golf course.

"They looked despondent, sitting on the patio waiting to die," says Caroline Lee, an attorney and Queens resident who helped assist Volunteers For Wildlife remove eight Pekin ducks from the club on January 13th. "Even in good weather, they have huge nutritional needs. Without food or water or shelter in sub-zero temperatures, they don't stand a chance."

Lee says the sympathetic groundskeepers told her that the club first purchased the flightless ducks in 2005, and cared for them until a new head groundskeeper was hired last year. The new groundskeeper, his subordinates said, made it clear that the ducks weren't to be fed. The workers would try to sneak them food anyway.

"I guess with the golf course empty in the wintertime, that's when they saw their opportunity to get rid of them," Lee speculates. 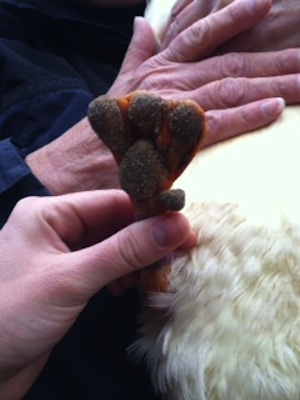 The ducks that were rescued were extremely emaciated, had poor feather condition, and suffered from a foot infection, according to Jessica Drew, an employee at Volunteers for Wildlife. "They all had bumblefoot, which is an infection that causes wart-sized bulbs to form on the bottom of their feet," Drew says. One duck was missing half a foot.

After they were treated at the animal hospital, Lee adopted three of the ducks. She drove the other five to an ASPCA in Massachusetts, as Volunteers For Wildlife can't board domesticated animals.

Lee has filed a complaint with the Nassau County DA, but says she hasn't been contacted by any investigators. The DA's new Animal Crimes Unit recently announced the prosecution of a West Hempstead man for maintaining a dogfighting kennel.

"We'd like to see that same attention to animals that aren't typical pets," says John Di Leonardo, the founder of the group Long Island Orchestrating for Nature. "It's wrong to starve an animal, whether it's a dog or a duck."

A spokesman from the DA's office said that the case is being reviewed.

According to Lee, Rockville Country Club's head groundskeeper is aware that the ducks were rescued.

"He was watching us take them from a distance," she said. "I think he just wanted them dead or away."

The country club has not responded to requests for comment.

"The workers there loved these ducks," Lee said. "They're adorable. We're talking about the Aflac duck—who doesn't love ducks?"

#animal cruelty
#long island
#nassau county DA
#rockville country club
#original
Do you know the scoop? Comment below or Send us a Tip