Counterfeiters Get Coal This Christmas 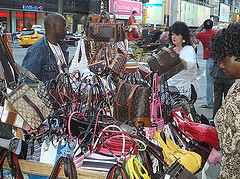 Earlier this year the law started cracking down on illegal bootleggers of all kinds, so those looking for more inexpensive gifts like Prada bags or not-yet-released DVDs on the city sidewalks may be barking up the wrong Christmas tree.

The NY Post reports that cops are paying extra-special attention to the counterfeiters this year, leading to a big decline in sales for the sidewalk entrepreneurs and aiming the consumers to (gasp!) legit storefronts.

That's great news for legitimate shop owners, who argue that the fly-by-night peddlers should be tossed in jail for routinely breaking the law by hawking knockoff handbags, watches, perfumes and the like.

"This holiday season looks really bad," moaned John Blattle, 52, who sells watches off a folding table on West 34th Street. "A lot of people were looking, but nobody was buying. It's really disappointing because all my money is tied up in this."

Not only is there less money coming in, there's more risk for people like Blattle, who now have to watch out for the bulked up task force set up to "keep tabs on peddlers this season." Unsurprisingly, the most watched areas are those that are tourist-heavy: Times Square, Fifth Avenue, Rockefeller Center and Herald Square. But fear not, if you really want that knock-off there are licensed peddlers out there.