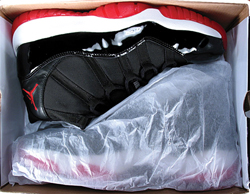 Cops seized 160,000 pairs of counterfeit Nike shoes from six locations in Queens, Brooklyn, and Staten Island after conducting a multi-year investigation to disrupt pirated merchandise. The New York Sun reports that it was one of the largest busts of counterfeit goods in US history and one of four recent successful operations that targeted purveyors of fake Microsoft, Motorola, and Nike products. The haul of bogus shoes was reportedly worth $7.1 million.

The Staten Island-based counterfeit distribution ring was initially infiltrated two years ago, and undercover cops eventually purchased thousands of dollars worth of fake Nikes and Louis Vuitton handbags. Investigators believe that the counterfeit goods may have originated overseas and are working with federal authorities to determine their source. In contrast, a bogus Motorola merchandise outfit was busted in Sunset Park, Brooklyn last month, after fake Bluetooth earpieces that were made in America were sold in New York. Motorola asked the NYPD look into a possible counterfeit ring when customers began calling the company and complaining that the earpieces were causing a burning sensation when used.