Two cops weary of participating in blizzard-related news sought new adventure early this afternoon in Windsor Terrace, where they responded to a call regarding a kitten in distress. Police say that officers Christopher Ranelli and Kenia Marte of the counter-terror and protest policing Strategic Response Group were tooling through the neighborhood around 12:35 p.m. when a driver flagged them down at Ocean Parkway and Sherman Street. 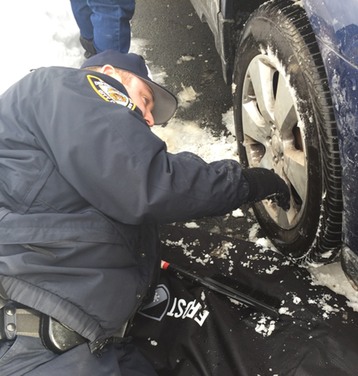 The distressed motorist reported that a black kitten had run into the street moments earlier, stopping traffic. When the woman got out of her car, she said, the little critter scrambled up into one of her wheel wells.

Rinelli and Marte sprang into action, first trying to reach under the car to grab the distressed furball. Unable to get at her, they took things to the next level, jacking up the car and taking off the wheel. Cat in range, Rinelli grabbed her and swaddled her in a towel.

The happy ending didn't end there. I'll let the NYPD press release take it away:

Although cold and wet, the kitten appeared to be unharmed. The owner of the car, Geraldine Cassone, took custody of the two-month-old kitten and intends to adopt her. She has yet to name the lucky post-storm stray.

May all our days be blessed with cute cat stories, clear crosswalks, and a robust First Amdendment. Amen.