Joseph Midgley, a volunteer for Picture the Homeless, represents four of the 684,330 stops initiated by the NYPD in 2011. "I have been stopped and frisked four times and each time I have been standing in public places," he told a crowd of reporters gathered at City Hall this afternoon. "I've been questioned by the police and asked if I had anything illegal on me. To which I replied, 'no.' My pockets were still searched. Nothing illegal was found. I was never charged. Never even given a ticket on all four occasions. This form of discriminatory policing is outrageous and it must stop. Not tomorrow, not next year, but today."

Analysis revealed today by the NYCLU finds that street stops have soared 600 percent during the course of the Bloomberg administration, with minorities being disproportionately targeted in record numbers. Of those stopped and interrogated on New York streets, 41 percent were young black or Latino men aged 14-24, a group that represents just 7.2 percent of the population. Today Kirsten John Foy, an aide to the public advocate, challenged Commissioner Kelly's defense of stop-and-frisk policies as an effective means to combat crime. "How can you have a cohesive argument that starts off by saying, 'we're not racially profiling,' but then is undergirded by, 'Most of the crime committed is by blacks and Latinos,'" said Foy. "Even if you were to concede that archaic argument, you can't then say that we're not having a racially based policy. You can say, 'our policy is justified because this is where crime happens,' but you can't say this isn't about race and then say most of 'them' commit the crimes." 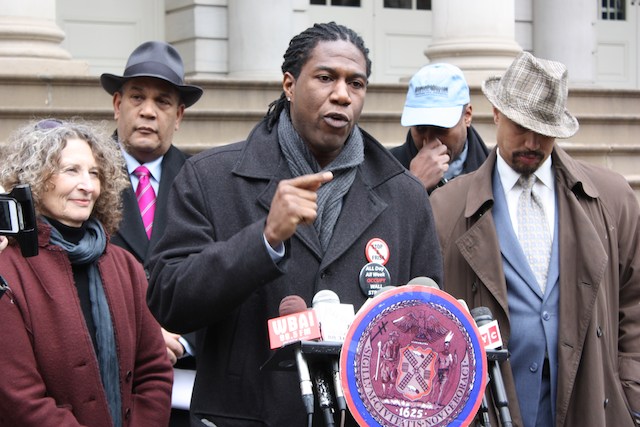 Councilman Jumaane Williams was quick to jump in on the mic and interject: "That's bullshit. And you can quote me on that. If they used that for other things we would see young white men being stopped at record rates for marijuana possession because statistics say that they're the ones who use it most; we'd see every white man with a briefcase getting stopped on the street because they might be committing a financial crime."

Earlier Williams touted gun buyback programs and called for financing to ramp up such efforts to remove firearms from the streets. NYPD spokesman Paul Browne has argued that 819 guns had been removed from the street as a direct result of stop-and-frisk operations. "How dare you repeatedly tell us that we as elected officials of this community are too stupid to understand what is going on," boomed Williams. "How dare anyone tell us that these policies are good for our community when we who represent the community are telling you that they are not. Every single day we hear from our constituents that they feel invaded by the police department that I'm trying my best to convince people are our community partners."

Williams went on to blast Browne directly: "What do we do with a spokesperson who is either a liar or incompetent? He can't be both honest and competent, as the mayor has said." Daaaaaamn, you gonna take that Pinocchio?

According to Donna Lieberman, Executive Director of the NYCLU, a mere 0.15 percent of stops in 2011, or one for every 650, led to an arrest for firearm possession. She declared that the NYCLU's findings are just the "latest in a string of scandals" to rock a police department that is long overdue for independent oversight and investigation by the Department of Justice.