Councilman: Inwood's Fear Of Luxury Development 'Is Real' But Some Are 'Spreading Lies'

Two days after a tense anti-gentrification rally in Inwood, City Councilman Ydanis Rodriguez appeared on The Brian Lehrer Show Monday morning to address what he previously called protesters' "Trump-like actions." Over 100 Inwood residents gathered at the intersection of Sherman Avenue and Broadway on Saturday to protest the proposed spot rezoning of 4650 Broadway, which would allow the Acadia Realty Trust to construct a 15-story, mixed-use building on the property.

"I have a lot of respect for many men and women who were there on Saturday, expressing their voice," Rodriguez said. "However, there were a few individuals telling people that if the building is built, you'll be out of your apartment. There was a lady there, 80 years old, who was crying at the end of the protest because she thought she would be out, even though she lives in a rent-controlled apartment."

"I heard people saying that they were going to start selling buildings around here, that we would be driven out," Yolanda Rosario, a 76-year-old Inwood resident, told Gothamist after Saturday's protest. 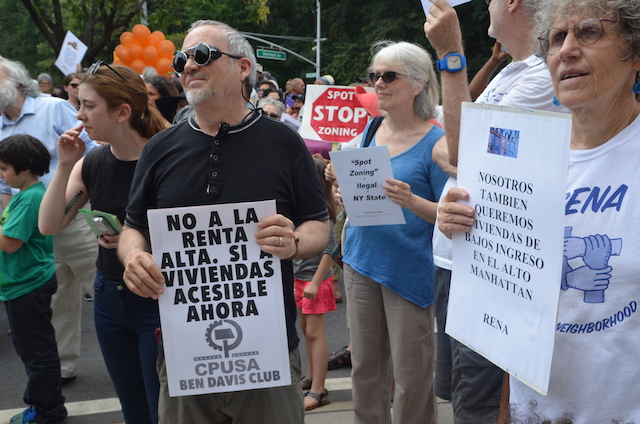 But the protesters who came out to oppose Sherman Plaza were not solely concerned with protecting rent-stabilized tenants.

"We have a lot of tenants here with preferential rents," Ava Farkas of the Metropolitan Council on Housing said. "Anyone who has a discounted, preferential rent is going to see a rent hike [if the rezoning passes], and that's what we're afraid of. An influx of luxury housing is going to wreak havoc on this community."

Almost 3,000 of the 11,713 rent-regulated units in Inwood receive a preferential rent rate, a discounted rent that can be raised to market value at the landlord's discretion. Some protesters on Saturday accused the councilman of being out of touch with his community's needs.

"Fear is real uptown, I know it, I feel it," Rodriguez said on Monday's show. But he also chastised politicians who he believes are using that fear to push an anti-development agenda. After Saturday's protest, he said on Twitter it was "upsetting" to see people "spreading lies about development."

Upsetting to see Trump-like actions uptown, playing on peoples fears while spreading lies about development. We stand against gentrification

Among others, Rodriguez called out George Fernandez, the former Community Board 12 chair who is currently running for State Assembly. (At Saturday's rally, Fernandez told the crowd, "Folks with preferential rent: prepare yourselves, because we've got a big battle to fight against these landlords. They will not renew your rents, they will tell you 'move, or I want the $1900. I want the $2500.'") Rodriguez and Fernandez sparred once more on Monday morning's show.

Rodriguez reiterated his earlier statement that voting against the rezoning of the proposed Sherman Towers site could result in the construction of a 14-story luxury building of all market-rate units.

"The developer already submitted an application to build 14 floors as-of-right, all-market, all-luxury," Rodriguez said. He linked to Acadia's application [pdf], which was submitted on June 20, on his Twitter account.

"That right has existed since 1961. All of the zoning in Inwood has not changed since 1961, that's not something you change lightly," David Thom of the Inwood Preservation Group told Gothamist. "Inwood residents understand the existing zoning and have no problem with it. The rezoning is the problem, and the tradeoffs of a massively bigger building with more market-rate units and a few not-so-affordable units is bad urban planning and simply not worth it." 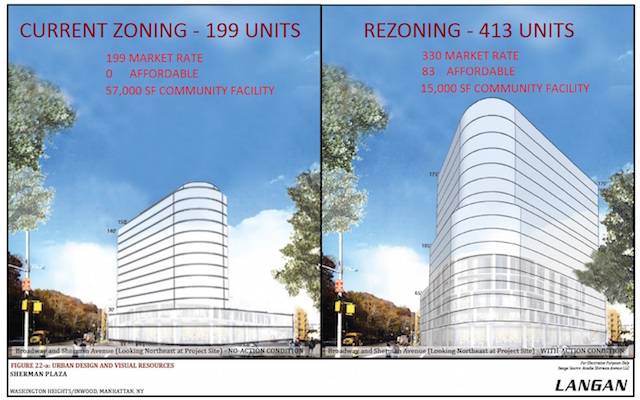 (via the Inwood Preservation Group)

Under the rezoning proposal, the developer would be required to make 20% of units affordable to New Yorkers who make 40% of the Area Median Income (AMI), approximately $31,000. Rodriguez has previously said he is working with the developer to ensure that 50% of the units will be affordable, although an agreement has not been reached yet.

Residents are concerned that following a rezoning, the Acadia Group could sell the Sherman site to another developer who will not be required to adhere to any affordability requirements.

"Developers don't keep their promises," Fernandez said on the Monday morning show. "There's no law that can hold a developer accountable to their MOU [memorandum of understanding]."

Both the City Council's Subcommittee On Zoning and Franchising and the Committee on Land Use will vote on the Sherman Plaza rezoning Tuesday. If it passes, it will move to the rest of the City Council. Rodriguez maintains that he has not yet made a decision.

[Disclosure: I interned at Rodriguez's legislative and district offices for 2 months in 2014]