Councilman Gallagher Pleads Guilty to Sexual Assault and Will Resign 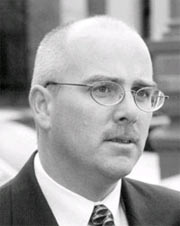 Dennis Gallagher, the married City Councilman representing Queens who was accused of raping a constituent in a drunken encounter last year, announced his planned resignation after pleading guilty to sexual abuse and forcible touching. Last summer, a 52-year-old woman alleged that she met Gallagher at a bar in Queens and after a night of drinking went with the Councilman to his district office, where he raped her.

Gallagher's office was searched by police and DNA testing was conducted, with the Councilman eventually being indicted by a grand jury on rape charges. That indictment was dismissed in January on grounds of improper questioning of Gallagher by the prosecutor, which jurors complained was intended to make the Councilman "look foolish."

In a deal with the Queens DA's office, Gallagher announced today that he was pleading guilty to sexual abuse and forcible touching and that he would continue to seek treatment for alcohol abuse. He will be resigning his City Council seat on April 18th, which will require a special election to be filled. Gallagher was one of only three Republicans in the entire 51-member City Council.