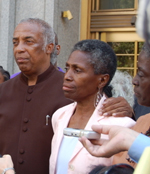 City Council Speaker Christine Quinn is seeking the dismissal of a civil suit against her filed by Council Member Charles Barron's former chief of staff Viola Plummer. Quinn gave Plummer the boot when the councilman's aide refused to sign a pledge to compose herself while the City Council was in session.

The City Hall drama all began when Queens Councilman Leroy Comrie refused to vote in favor of naming a street after black activist Sonny Carson. That's when Plummer pledged to "assassinate" him; something she claims was politically metaphorical, but others took more literally, given the murder of Councilman James Davis on the floor of the council chamber in 2003.

Plummer's boss, Councilman Charles Barron, objected to her physical removal from the chamber floor after the formal objection, and yelled at Quinn that she would never be Mayor of New York (Quinn is one of many Democrats who seems to be interested in succeeding Mayor Bloomberg). Barron told the Sun, "Can you imagine Nancy Pelosi calling up Charles Rangel and firing his chief of staff? Or Sheldon Silver telling an assemblyman that your staff member works for me and I'm firing him? Or Joe Bruno?" No, but we'd love to see what would happen if it did!