City Council Speaker Melissa Mark-Viverito is preventing the Council from voting on a pair of police reform bills that have significant support from Councilmembers. The New York Times reports that Mark-Viverito announced during a closed-door meeting that the bills, known together as the Right to Know Act, had been shelved and won't go up for a full Council vote. The bills' two main sponsors weren't present because of prior obligations.

The bills would require officers to get recorded or signed consent before searching people's homes or cars when they lack a warrant or probable cause, to report quarterly on such searches, and to identify themselves by name and explain their reasons for stops. For stops that didn't end in arrest, they would have to hand out cards including contact information for the Civilian Complaint Review Board.

Some advocates speculate that Mark-Viverito, who attained the speakership with the help of aggressive maneuvering by Mayor Bill de Blasio, is trying to spare the mayor the embarrassment of vetoing police reform legislation after having won election on a campaign centered around police reform. The mayor and police Commissioner Bill Bratton opposed the Right To Know Act—at a hearing last summer, Bratton called it and a handful of other bills, including a chokehold ban and use-of-force reporting requirements, "unprecedented intrusions"—and de Blasio has shown repeatedly throughout his mayoralty that he is unwilling to publicly oppose Bratton on policy despite the commissioner's frequent inflammatory statements that run counter to de Blasio's alleged liberal politics.

The Times reports that instead of new laws enforcing the restrictions on baseless, unconstitutional searches, and mandating that officer identify themselves, Mark-Viverito agreed to allow the NYPD to implement the changes internally. The agreed-upon requirements—that police hand out business cards when asked, and get a "yes" response before conducting a search that would otherwise be illegal—could be changed or removed by any NYPD commissioner at any time.

Bronx Councilman Ritchie Torres, sponsor of one off the bills, told Politico New York neither he nor the other sponsors approved of the compromise. Torres has been traveling out of state, and fellow sponsor Antonio Reynoso is on his honeymoon.

He added, "My bill has a full coalition behind it, the progressive movement is behind this and those of us in the coalition have far greater trust in the rule of law than in the rule of Bill Bratton."

Activists who support the act skewered the decision to rely on the department to police itself, emphasizing that there are already Patrol Guide policies addressing the kind of behavior the legislation is meant to address, and saying that officers often violate those policies.

"An agreement with the NYPD does not hold the weight of legislative oversight and these administrative changes are watered down and on top of existing NYPD rules that are already frequently violated without repercussion," said Anthonine Pierre, a spokesman for Communities United for Police Reform. "There should be no confidence that this agreement will provide meaningful change for communities—without real accountability and enforcement mechanisms, police abuses that leave community members at risk of harm will continue in everyday interactions."

The Civilian Complaint Review Board substantiated 180, or 1 in 10 improper search cases it investigated from 2010 to 2015, and found that in nearly all of the substantiated cases, those searched did not give consent, and many vocally objected. Anecdotal accounts of officers concealing their badges and refusing to identify themselves are plentiful. And as a memo from Communities United for Police Reform notes, the Patrol Guide already limits officers to searches to which they get consent, and already requires officers to "courteously and clearly" provide their names, badge numbers, and command details upon request.

The Times writes that the closed-door announcement surprised Council members and sparked an hour of sometimes-heated discussion, with "few" piping up in support of Mark-Viverito. The speaker cut the deal with the police department late last month, according to the paper.

"This is change; this is reform. This is moving forward," Mark-Viverito told the paper. "Obviously we did not get 100 percent of what was laid out in the bills," she added. 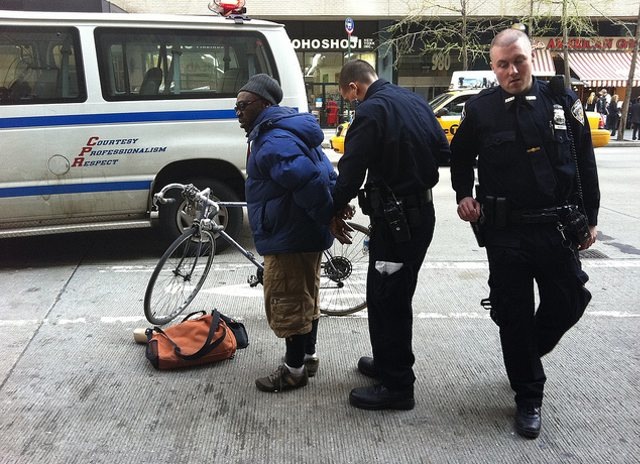 The bills have been proposed in some form since 2012, and it is still possible for them to be put up for a vote, and if de Blasio vetoes them, for Councilmembers to override the veto with a two-thirds majority. The move to halt the widely supported legislation didn't surprise one weary police-reform advocate.

Gangi was skeptical about the bills, and the efficacy of a recently passed package of legislation that gives officers the discretion to steer low-level offenses such as public urination into the civil court system.

"The racist practices of the police department, which we call quota-driven broken windows policing, will not stop with any legislation unless you ban the practice," Gangi said.

The changes that would put a dent in such bracing statistics as 92 percent of the people arrested for selling or possessing marijuana being African-American or Latino could come from the police commissioner, Gangi said, but it would take a drastic shift in the political climate.

"I don’t think there’s a mainstream politician anywhere in the country who is willing to try to fundamentally change policing," he said.

Three bills that would mandate new police reporting on use of force data have not been held up, and are headed for a full Council vote on Thursday. Activists have criticized the stripping out of requirements in the bills for the NYPD to record demographic data, which they argue is essential because racial disparities are at the center of what's being discussed.

Four days ahead of the second anniversary of the death of Eric Garner, a bill to criminalize the police use of chokeholds, no longer fully banned by the Patrol Guide, has stalled at the committee level, as have other police reform bills. Here is a roundup of the status of the nine police-reform bills considered at a hearing last summer.

Intro. 182-A: Would mandate that officers identify themselves by name and explain the reason for stopping someone. If an interaction didn't end in arrest, officers would be required to give a business card including contact information for the Civilian Complaint Review Board. Vote stopped by Council Speaker Melissa Mark-Viverito

Intro. 541: Originally proposed as part of the Community Safety Act, it would require officers to get recorded or signed consent before searching someone or their home or car when performing a search without a warrant or probable cause. The NYPD would then be required to issue quarterly reports on searches performed without a clear legal basis. Vote stopped by Council Speaker Melissa Mark-Viverito

Intro. 538: Would require cops to only use the amount of force necessary to protect themselves from harm or death. Stalled at the committee level

Intro. 540-A: Would make a police chokehold a misdemeanor punishable by as much as a year in prison and a $2,500 fine. Stalled at the committee level

Intro. 607: Would create a task force to come up with a police body camera policy. Stalled at the committee level

Intro. 824: Would require the NYPD to publish the general location of the 200 officers with the most CCRB complaints, and require the department to report the division of the 500 officers named in the most police-brutality lawsuits. Headed for a vote on Thursday

Intro. 539: Would broaden the definition of "use of force" to include drawing a gun, firing a gun, grabbing someone by the neck or hitting him in the head, Tasing or Macing someone, or doing anything that puts someone in the hospital or kills her. "Use of force incidents" require cops to compile data for public reports, and the bill would also expand the types of data collected to include disciplinary outcomes for the officers involved. Headed for a vote on Thursday

Intro. 606: Would require reporting of uses of force in the course of Broken Windows enforcement, for crimes such as graffiti or public urination. Headed for a vote on Thursday

Intro. 809: Requires city social service agencies to develop a coordinated plan for offerings in the 35 highest-crime areas. Signed into law in May

Mark-Viverito's office did not respond to a request for comment.