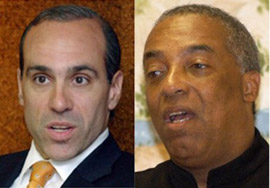 A City Council hearing had to be recessed after Council members James Oddo and Charles Barron got into a shouting match about a bill. The bill was the Clinic Access Bill--which covers harassment outside abortion clinics and is sponsored by City Council Speaker Christine Quinn.

In an opinion piece yesterday in Metro (PDF), Quinn and NARAL Pro-Choice NY President Kelli Conlin explained that the Clinic Access Bill will allow health clinics staffs to have "protestors arrested who deliberately interfere with a clinic's operations" as well as "allow police to arrest protestors they see blocking clinic entrances and exits as well as parking lots and driveways."

Oddo, who is against abortion, thinks the bill prevents anti-abortion protestors from gathering outside clinics, "I am somewhat amused by my good friend Charles Barron accepting a curtailment on free speech." Barron later said to Oddo, "For you to be confused on that is interesting, probably some hidden views on this issue, period." Oddo fired back, screaming, "Don't imply something, that I have a hidden agenda here," while Barron retorted, "Don't imply I'm impinging on First Amendment rights." When calls for order were ignored, a 5-minute recess was called. Politicker NY writes, "This is not entirely unexpected behavior from either Oddo or Barron."

You can read the bill here, and here are some more explanations: Staten Island Advance says it "would give abortion providers the right to press harassment charges if the incident occurs within 15 feet of a clinic, without having to prove the intent of that harassment. The current law allows police to arrest someone only if they can prove they intended to prevent a patient from gaining access to the clinic." And NY1 adds "it's nearly impossible in New York City to arrest a protester without the cooperation of the woman entering the facility. The new bill would give more weight to complaints of clinic employees or other witnesses."