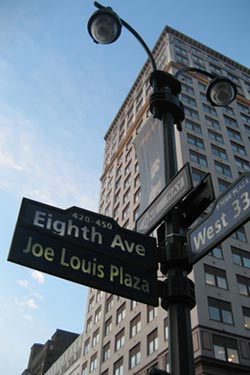 No more naming streets like Joey Ramone Place, Peter Jennings Way, Bob Marley Boulevard, or Jerry Orbach Way. If one City Council member gets his way, the commemorative naming of streets would stop because it's too much of a time waster for the council. James Oddo, the council's minority leader from Staten Island, wants to give the Department of Transportation the authority to approve new street names. Currently, the City Council has to approve the names after they are approved by local community boards. We find it shocking that a politician wants to give away power.

The Sun finds that the council approved 127 new street and place names in 2006 and it approved another 50 this May, including that of Jerry Orbach Way, which had a hard path to being named. And we haven't heard anything more about Kurt Vonnegut Way. Oddo's idea to make the change came during the debate to name a street after Sonny Carson (it was voted down) when many councilmembers wondered why they were involved in the naming process.

The bill, which Mr. Oddo doesn't think will have too much support, would still allow the council to have hearings on names if 6 or more members wanted. The Gotham Gazette had a nice piece on how street names come about earlier this year.

Photo of Joe Louis Plaza by wallyg on flickr