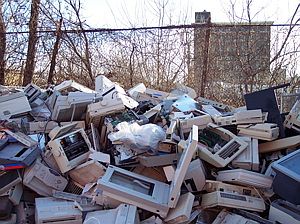 Twice a year the Department of Sanitation sets up an electronic recycling event in each borough; in Autumn ’06 they collected 191 tons of electronics and 1,245 pounds of cell phones.

It’s a step in the right direction, but for New Yorkers trying to save space in cramped apartments, these events are far too infrequent and inconvenient. So a huge amount of e-waste – 25,000 tons a year – ends up in landfills, where it spends the rest of recorded time oozing toxic waste like lead, mercury, and arsenic. Or it gets incinerated in Newark, which yields mercury, dioxin and other toxic emissions.

The City Council is now grappling with the problem and considering a bill that would require all manufacturers who sell their products in New York City to take their products back for recycling at no charge to consumers. The bill would cover computers, computer monitors, TVs, and portable digital music players. It would also include a new law making it illegal for people to dispose of these items. If passed, the manufacturers will set a goal for what percentage of their product they’ll take back each year and face fines in the neighborhood of $50,000 for non-compliance.

The Sun notes that several states have passed similar legislation in recent years, including California, Maryland, and Maine, with the New Jersey assembly approving a bill earlier this week. Dell already has a program to pick up its products for recycling, while Apple and Hewlett-Packard accept products mailed back to them.

Fun fact: All wireless telephone service providers that sell cell phones in New York State are required to take them back for recycling from any person at no cost. The Lower East Side Ecology Center also helps with recycling. And if you've ever wondered what can be recycled and what can't, there is an exhaustive list.