Could One Of 'Junior' Guzman-Feliz's Alleged Killers Be A Victim Of The 'Spillover Effect'? Few crimes in recent New York City history have provoked as much outrage as the murder of 15-year-old Lesandro “Junior” Guzman-Feliz.

The grim facts of Junior’s bloody murder were captured on video and widely shared on social media before they were broadcast on the evening news: A group of young men pull the teen from a Bronx bodega, then stab and slash him to death with knives and machetes on the sidewalk outside. It was a tragic case of mistaken identity.

Governor Andrew Cuomo called it a “terrible, horrendous act,” and set aside $19 million to pay for "anti-gang" programs in the Bronx. Mayor Bill de Blasio said it felt “very personal to have lost an exemplary young man”; and Cardi B re-posted a photograph to her Instagram account of the dead boy being hugged by his mother, commenting ”These Bronx streets are ruthless.”

Fourteen men, ranging in age from 18 to 29, have been charged with second degree murder, manslaughter, conspiracy, gang assault and weapons’ offenses. Five of the 14 also face first degree murder charges, for allegedly wielding the weapons that killed Junior. The remaining nine are alleged to have “acted in concert” with the five.

With their trials set to start in February, new revelations cast doubt on whether one of those nine belongs to the gang police say carried out the killing.

Danilo P. Pacheco was granted bail in October by the judge presiding over the case, Robert A. Neary. Pacheco’s lawyer, Donald Vogelman, told the court Pacheco was not a member of the gang, the Trinitarios, and prosecutors did not dispute it.

The only defendant in the case granted bail, Pacheco remains jailed in lieu of $500,000 dollars cash or bond.

Justice Neary—who served as a prosecutor in Westchester for 28 years, and who as a judge was once censured for calling a defense lawyer a "clown" in front of a jury—told lawyers for the defendants that he intends to try the case in February. Pre-trial hearings, he said, start in January.

How Pacheco was indicted along with 13 alleged Trinitarios—a gang born on Rikers Island, long-known for meting out street justice with the edge of a blade—raises questions about the evidence against him, and shows how people can be pulled into gang violence, as both victims and perpetrators, even though they are not gang members.

The inquiry also spotlights a 15th suspect originally sought by police, but not publicly charged with a crime, who appears to be cooperating with investigators. Michael Sosa Reyes was captured on surveillance video entering the bodega, part of the group hunting for Junior. (A spokesperson for the Bronx DA declined to say whether Reyes has been charged.)

Rival Trinitarios factions “Los Sures” and “Sunset” were at war on June 20th, 2018. Late that evening, in the Bronx, Los Sures members were hunting for Sunset members in a convoy of four cars. Spotting Junior, they mistook him for a Sunset member and chased him into a bodega, prosecutors say.

Junior, an NYPD Explorer who police said wanted to become a detective, wasn’t in a gang, but had friends who were, and may have spent time with them at Adams Place, the popular neighborhood hangout he had been headed to when he was targeted, according to the New York Times.

While only five are charged with wielding the knives and machetes that killed Junior, the remaining nine, including Pacheco, are alleged to have assisted the five, by either chasing Junior into the bodega or pulling him from it.

Meanwhile, a new court filing by prosecutors details some of the evidence police and prosecutors have gathered in the case, including six vehicles, statements by five of the defendants, four knives, a silver box-cutter, DNA, dried blood, cellular telephones, EZ pass records, videos and photographs.

Some of the accused suggest that while they may have agreed to beat up rivals, they did not agree to murder anyone.

Defendant Danel Fernandez, for example, told police, “Check the video. You won’t see me with a knife in my hand. I didn’t stab him,” according to the new court filing.

Defendant Kevin Alvarez said “I thought it was just going to be a fight when I came out the store and I turned around and saw the machetes,” the New York Daily News reported.

“I didn’t know that,” he said. “I only saw (the knives) when I came out of the store. I backed up and put my arms up. I yelled at them to stop,” Alvarez claimed.

Pacheco, 21, surrendered on July 6th. His family said he had never been arrested before.

“Laughing all the time. He makes a lot of jokes. That’s Danilo,” his older sister Daniella Payamps Pacheco explained.

“He’s never been in any gang,” she said. “He’s never even been suspended from school. I would’ve known. He’s my baby brother.”

Pacheco’s wife, Lisandy, who, at 27, is five years older than him, described her husband as “affectionate. He’s playful and he doesn’t bully anyone. He doesn’t like having enemies. He’s just a nice person.”

But Pacheco was riding in Sosa Reyes’ car the night Junior was killed, and is alleged to have been among the group that chased the boy into the bodega.

Vogelman, his lawyer, told Gothamist Pacheco was “merely at the scene of a gruesome crime,” and “did not participate.”

“Pacheco isn’t a Trinitarios, or a member of any gang,” Vogelman added.

When asked whether prosecutors consider Pacheco a Trinitarios member or not, Bronx DA spokesperson Patrice O'Shaughnessy hedged, quoting language in the indictment alleging he killed Junior because of his membership in the gang, “or affiliation with” it.

The NYPD did not respond to a request to disclose whether Pacheco is listed in its gang database as a Trinitarios member. 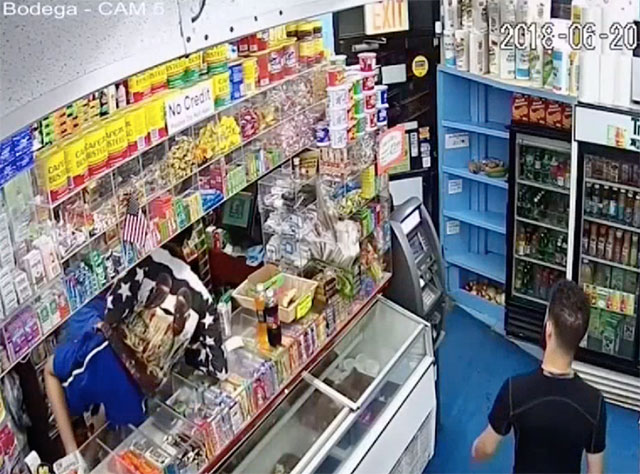 If prosecutors can’t prove Pacheco is a Trinitarios, their case against him could falter, according to Kevin McCarthy, professor at the John Jay College of Criminal Justice and former head of the Organized Crime Strike Force for the U.S. Attorney’s Office in Newark.

“If the heart of the conspiracy is conduct by a gang, then not being a member of that gang would mitigate against the charge,” McCarthy said.

Still, in this case, as with any serious criminal case with multiple defendants guilty to different degrees, if at all, the least guilty can be convicted of the worst crimes because of what McCarthy called “spillover effect.”

“Highly incriminating proof against one defendant tends to spill over to other defendants, despite judges’ instructions that the proof must be considered against each defendant individually,” McCarthy explained.

Daniella, Pacheco’s sister, said her brother met Sosa Reyes in high school, and stayed friends after. Sosa Reyes had a car; her brother did not, she explained, a calculus familiar to any teenager. The evening of Junior’s murder, Sosa Reyes picked Pacheco up at home and drove the two to a nearby park, where they hung out.

Around 11:00 p.m., they got back into Sosa Reyes’ car and were headed to what Pacheco thought was another park, Daniella said, but Sosa Reyes joined a convoy of cars. When Sosa Reyes spotted Junior, he pointed to the boy and told Pacheco he “beat-up an old lady,” Vogelman says.

Pacheco hopped out of the car and moved toward the boy, but stopped when he saw a man armed with a machete, Vogelman said, and retreated to the car. By his account, Pacheco was out of the car for about 10 seconds.

After Pacheco got back in the car, Sosa Reyes sped forward past the bodega, parking up the block from it. When Sosa Reyes left the car and went inside the bodega, Pacheco remained with the car, either sitting inside or standing beside it, video shows.

At one point, he got out of the car, stood next to its rear bumper, raised a hand in the air and signaled, then went back into the car.

Vogelman said Pacheco signaled to Sosa Reyes to “get back in the car,” because “Pacheco wanted them both to leave,” but at Pacheco’s bail hearing prosecutors said the signal pointed to the bodega—marking it for Junior’s killers as the place he could be found.

A Bronx jury will decide which version is true, absent a plea-bargain. 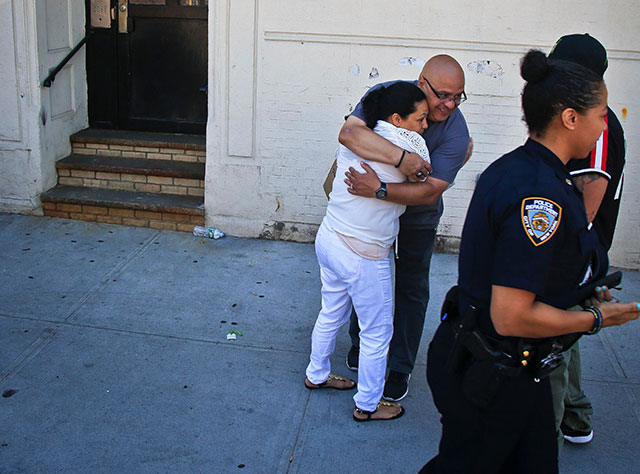 Leandra Feliz, far left, hugged by Rev. Chaplin Carlos Baez, after leaving her home a block from where her son was killed in June (Bebeto Matthews/AP/Shutterstock)

“I just need justice for my son,” Leandra Feliz, Junior’s mother, told Gothamist outside court after the defendants’ October hearing. “Keep me in your prayers, and Justice for Junior,” she added.

Earlier, inside the courtroom, Feliz hissed "asesino"—Spanish for killer or assassin—at Kevin Alvarez, who allegedly dragged Junior from the bodega to his knife-wielding killers outside. She did not appear at Pacheco’s bail hearing.

Pacheco’s due back in court December 21st, when Judge Neary is expected to set a trial date.

#Danilo Pacheco
#junior
#justice for junior
#Lesandro Guzman-Feliz
Do you know the scoop? Comment below or Send us a Tip