Several years ago, Gabino Hernandez was arrested after a bar fight. It might have been a minor affair, but Hernandez, a father of four, had a prior deportation order on his record, which meant that Immigration and Customs Enforcement could detain him indefinitely. Hernandez spent two and a half months on Rikers Island and eventually decided to accept a plea deal, just “to get out.” Although he was eventually released to his family, he is still fighting a deportation order.

“I would never have been in this situation if it were not for the collaboration between ICE and the city,” Hernandez explained to the audience at a recent City Council Committee on Immigration hearing. “I would have paid my bail and been back with my family as always. That’s why I think it is critical to pass this proposal, so that fathers like me don’t have to confront family separation.”

The City Council ended up passing two reform bills in a 41-6 vote last week. The legislation will significantly limit cooperation between the NYPD, correctional agencies, and federal immigration authorities. But while immigrant advocacy groups have welcomed the new laws, there is also concern that the legislation does not go far enough—and may even have unintended consequences for undocumented and non-citizen New Yorkers.

ICE issues "detainers" to local and state authorities, requesting that they hold individuals suspected of immigration violations for up to 48 hours after they would otherwise be released, so that they can take them into physical custody in preparation for deportation.

Once Mayor Bill de Blasio signs the bills, New York City will only keep individuals in custody at the request of ICE if they have been convicted of a felony “violent or serious crime” within the last five years, and if the request is accompanied by a warrant from a federal judge. The ICE office on Rikers Island will also be shuttered.

The City has limited the circumstances under which it will comply with ICE detainers twice before, first in 2011 and again in 2013—but the NYPD and the Department of Correction have still been cooperating with the majority of requests.

In requiring that ICE detainers be accompanied by a warrant from a federal judge, legislators aim to create a unified legal standard for all New Yorkers—that nobody, regardless of status, should not be subject to arbitrary detention or imprisonment. And the bills will undoubtedly provide much-needed protection to the vast majority of undocumented and non-citizen New Yorkers; Daniel Coates, Lead Organizer at Make the Road, estimates that about 2,000 deportations will be prevented each year.

Still, not everyone qualifies for relief.

Regardless of whether a judicial warrant has been issued, detainers will be honored for those who unlawfully re-entered the county after a previous deportation and have previous convictions for “serious or violent” offenses. That means that two people with similar criminal histories could be picked up by the NYPD on suspicion of a crime—and both subsequently cleared of involvement—but while the citizen would be immediately released, the individual with an irregular immigration status would not.

The NYPD can also still detain individuals “identified as a possible match in the terrorist screening database” for up to 48 hours. As of June 2013, more than one million names had been placed on the list, which can even include people who have been acquitted of terrorism charges.

At a recent City Council committee hearing about the bills, Cynthia Conti-Cook of the Legal Aid Society voiced opposition to both these exceptions: “We are concerned that the creation of different standard for the Police Department will result in disparate treatment of non-citizens at arraignments and thus result in prolonged incarceration for some.”

Immigrant rights advocates also stress that even with the passage of the legislation, a significant degree of collaboration between ICE and city agencies may continue. Neither bill explicitly prohibits the sharing of personal data about New Yorkers between ICE and city agencies, or prohibits ICE presence at hospitals, courts, schools, homeless shelters, or other sensitive locations.

In a report published this month, the National Day Laborer Organizing Network (NDLON) noted that when other cities have passed detainer discretion laws, ICE agents have sometimes attempted to fulfill their quotas through other means.

“Rather than evolving alongside localities and reducing harmful deportations, ICE has responded by arresting people in new and different ways, including conducting enforcement operations in home and communities,” the report states.

The report also cites an internal ICE e-mail from January 2013, obtained through a Freedom of Information Act, which suggests that ICE has actively attempted to secure personal information on non-citizens in order to sidestep detainer discretion legislation. The email reads, “On the subjects that do not meet the new criteria for having detainers placed… get what info you can on them, Booking sheet, address, etc, and forward to FUG ops [fugitive operations] so they can be picked up.”

In a statement released shortly after the passage of the legislation, Luis Martinez, the Public Affairs Office for the ICE New York Field Office, said that "ICE will continue to work cooperatively with law enforcement partners throughout New York as the agency seeks to enforce its priorities through the identification and removal of convicted criminals and other public safety threats." 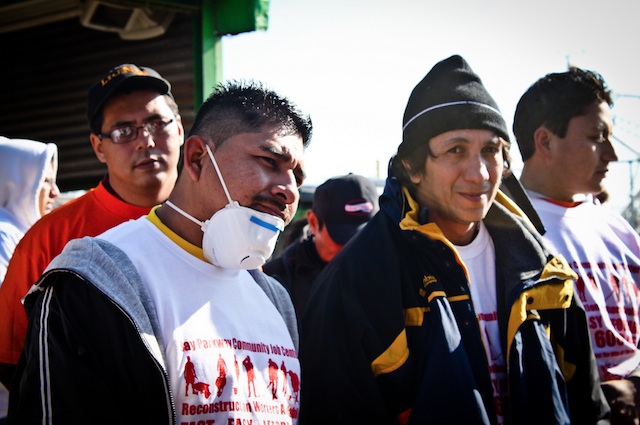 Even with these concerns, immigrant rights advocates both locally and nationally are celebrating the passage of the legislation.

“Local policies limiting ICE's overreach are keeping families together and significantly reducing the numbers of people who are turned over to ICE to fulfill its deportation quota,” said Tania Unzueta, the lead author on the NDLON report. She added that ICE’s efforts to circumvent detainer discretion policies simply prove that the scope of these policies must be expanded.

Abraham Paulos the Executive Director of Families for Freedom, a New York-based human rights organization run by and for families facing and fighting deportation, is still not entirely convinced. According to Paulos, who is active in the ICE-FREE campaign, upwards of 80% of those deported from New York City are taken from the city’s jails. He believes the bills might lead to an increase in home raids or the heightened presence of immigration agents elsewhere in the city.

“If you start to dismantle that apparatus,” Paulos says, “we don’t even know how that’s going to affect New York.”

Aviva Stahl is a Brooklyn-based journalist who primarily writes about solitary confinement and local and national anti-prison organizing. Follow her @stahlidarity.