Could Bloomberg Be a Democrat Next Year? 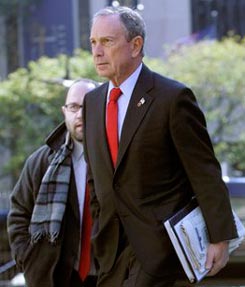 With the City Council's passage of a term limits extension, the Daily News reports that Mayor Bloomberg may consider running on the Democratic line. Bloomberg was originally a Democrat but became a Republican to run for mayor in 2001. Then he shed his GOP coat to be an independent last summer as he flirted with a third party presidential bid.

The News explains that though Bloomberg could run as an independent, "the independent line would be at the bottom of the ballot and difficult for voters to find - much less pull the lever on in the Democratic-dominated city." Therefore, "the mayor's brain trust has not ruled out trying to run him on the Democratic line."

Ha! Can you imagine a primary race between him, Anthony Weiner and Bill Thompson?! But that would only happen is three of five Democratic county leaders okay Bloomberg for the primary, and that would be especially unlikely if Thompson is running, "They can't help Bloomberg if it would hurt the man seeking to be New York's second black mayor."

In the mean time, Bloomberg has been busy giving whomever becomes the 44th president some advice, via a memo in Newsweek: He discusses immigration, education, energy, economy and emphasizes a "bold, independent agenda" for success in difficult times. Also, he added this:

As you prepare to assume the awesome responsibility of leading our country during a difficult period in our history, I want to leave you with one story. On September 11, 2001, I was a first-time candidate running for mayor of New York. After the attacks on the World Trade Center, one of my advisers said to me: "You sure you want this job?" Without blinking, I replied: "More than ever." At the time, I had no experience in politics, so I hadn't learned what I couldn't do. Looking back now, I realize that was my greatest asset.