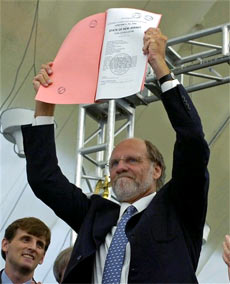 NJ Governor Jon Corzine told reporters that he will not use his e-mail anymore as NJ Republicans have filed a lawsuit demanding that Corzine's e-mails with ex-girlfriend and NJ union leader Carla Katz be made public. Corzine said, "We’ll go back to the 1920s, and have direct conversations with people." We'll guess his staff is also getting him books on Morse Code, smoke signals, and sending messages in bottles.

Now that Corzine's getting healthy after his car accident, the Republican party has been on his case. The NJ Republicans want to know whether Corzine and Katz's relationship played a role in the state's contract negotiations with Katz's union, Communication Workers of America Local 1034, and therefore wants access to this year's emails sent from Corzine's campaign e-mail address, votecorzine.org, as well as from his state e-mail address to Katz.

Corzine says that he did not discuss the negotiations with Katz over e-mail and that his campaign e-mails are private: "If somebody's mother is ill and somebody wants to say something personal, it's perfectly reasonable. Private conversations with individuals have moved more to e-mail than they have phone calls, and that's not unusual." He explained that using a campaign e-mail even after entering office was necessary, saying, "If you're talking politics on a state e-mail you're potentially having a criminal violation. Governors have political realities as well as public realties. We considered it the highest priority to not mix politics (with the public's business)."

A court hearing is scheduled for August 3. The NY Times says that Corzine is not all that technologically savvy: "While he has figured out how to use his BlackBerry to read e-mail messages, they say, he typically uses his cellphone to respond; and when he does reply by e-mail, the messages are typically short and riddled with typographical errors." And last month, Katz spoke to the Post's Cindy Adams, saying that her union dealings with Corzine were above board.

Photograph of Governor Corzine at Live Earth by Bill Kostroun/AP