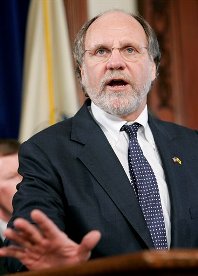 The City Council approved the plan on Monday night, and now the State Legislature will decide. If passed without the Port Authority's involvement (and $1 billion), NJ drivers would face an additional $3-4 toll when crossing over into Manhattan below 60th Street. Corzine issued a statement:

"I am dismayed at the attempt by the New York City Council and New York state lawmakers to politicize the selection of Port Authority capital projects -- a cooperative bi-state process that has served the people of New York and New Jersey so well for so many years.

"I am particularly disappointed at the threat to impose a toll surcharge on New Jersey drivers who are already subject to congestion pricing by the increased tolls they are paying to use the George Washington Bridge and the Lincoln and Holland tunnels.

"Unless this plan treats all drivers fairly, I am prepared to pursue legal action to protect New Jersey commuters from this outrageous action."

A spokesman for Mayor Bloomberg noted that Corzine is trying to raise tolls on NJ highways, an extremely unpopular plan in the Garden State, "We don't understand why it's OK for the New Jersey governor to hike tolls on New York cars on the turnpike and parkway to balance his state's budget, but New York can't raise revenue dedicated expressly for mass transit improvements for commuters across the region. That seems duplicitous." Still, the Port Authority is concerned over whether it can contribute $1 billion to the plan.

#congestion pricing
#Governor Corzine
#mayor bloomberg
#nj
#NY
#port authority
Do you know the scoop? Comment below or Send us a Tip
A new Gothamist is coming! We’ve moved comments over to our beta site. Click here to join the conversation and get a preview of our new website.