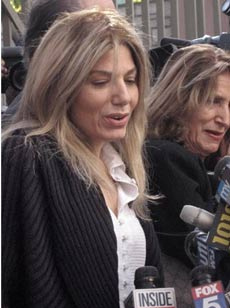 Ilana Benhuri filed court papers in early August suing Melanie Lidle and Stephanie Stanger (the widow of Lidle's flight instructor Tyler Stanger, who was also killed in the crash) for unspecified damages related to the 2006 crash that killed Yankee pitcher Cory Lidle and his flight instructor when the small airplane they were piloting flew into the side of a building on Manhattan's Upper East Side. 51-year-old Benhuri was badly burned during the incident, as the Cirrus aircraft crashed into the 30th floor at 524 E 72nd Sreet. Benhuri described the incident after she was released from the hospital, saying that the walls and windows "came just right into me and it threw me up in the air and threw me down in all the debris..." She also said that she was lucky to be alive.

Almost a year after the crash, Benhuri is returning from California and plans on moving back into her East Side home, which the New York Post reports is almost fully repaired. The amount she is seeking from Lidle and Stanger is not specified, but Benhuri spent a month in the hospital enduring several surgeries and skin grafts. Her husband Parviz Benhuri is also part of the lawsuit, looking to recover medical expenses incurred following the crash and to compensate him for not being able to have sex with his wife while she was recovering from her injuries. When she was released from the hospital, Benhuri said she also intended to sue the FAA.

Melanie Lidle previously stated that she intended to sue Cirrus, the manufacturer of the two-seater plane that her husband or Stanger was flying when it crashed into the building. FAA investigators were unable to determine who was piloting the plane at the time of the crash.