On a day when a dolphin got trapped in the Gowanus Canal—and it's unclear when anything might be done to help it—it's really nice to hear an animal story with a definite happy ending. And the fact that it involves "Rock Star" Newark Mayor Cory Booker and Twitter only sweetens the pot. After being alerted by a WABC reporter about a dog that was left shivering in the cold in Newark, Booker high-tailed it there to rescue the pup. Did we mention that he CARRIED THE DOGGY to safety? Too bad the Gowanus Canal isn't in New Jersey. 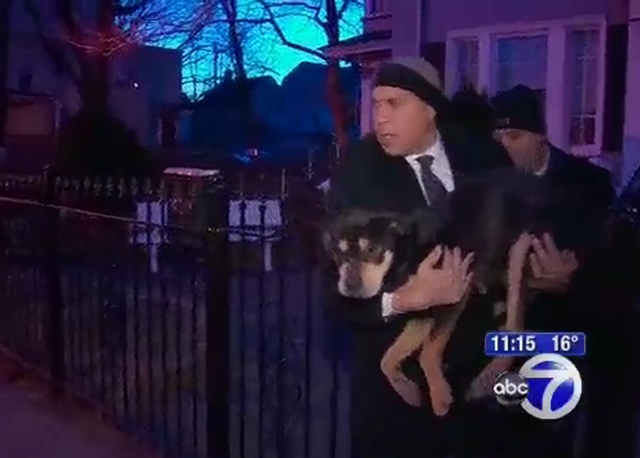 "Save me, Cory Booker"

Eyewitness News reporter Toni Yates and her crew saw the dog, and Yates Tweeted about it. Booker, followed by a police car, kept the dog warm and sheltered while waiting to talk to the owner. "This is brutal weather, this dog is shaking really bad and you just can't leave your dogs out here on a day like this and go away and expect them to be ok. Hypothermia on any animal including a human animal will set in pretty quickly. So this is very sad, you can just feel the dog shaking pretty badly," he told ABC.

Booker later thanked Yates on Twitter for her help saving the poor pup. The owner eventually responded and came home quickly, noting that he had no idea that "Cha Cha" the dog had gotten outside, and it was all a bit mistake. The owner was especially grateful because Cha Cha is a new mom, and has to take care of her puppies, and JESUS CHRIST AWW. Between his savvy Twitter skills and his Spiderman-like ability to be three places at once, it seems Booker has yet to meet the personal disaster, natural disaster, or Hot Pockets crisis he can't solve.