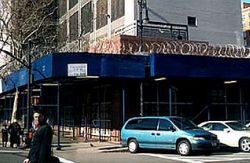 The Department of Corrections spoke with us today to clarify that "there is no timetable" for the reopening and expansion of the "House of D" in Downtown Brooklyn reported on yesterday. The original assertion that it would reopen shortly came from a Daily News claim that a letter to the state from the DOC stated the jail would reopen in a few months.

Stephen Morello, the Deputy Commissioner of the DOC told us that he was not aware of any such statement and that their plan is the same as it has been all along: to "fully utilize the existing building and its 749 beds" and hopefully add another 720 with the proposed expansion. He reaffirmed the DOC's stance that the jail has always been operational since it places inmates in holding cells as they await nearby court proceedings. He also said that the 31 inmates who were brought in this weekend as the first overnight guests the facility has seen in five years are taking care of maintenance on it in order to ready the facility to be fully repopulated prepare the facility to accommodate transient (not overnight) NYPD prisoners as they await arraignment in the adjacent courthouse.

Today's Brooklyn Paper talks to local residents about having hundreds of inmates back in their neighborhood and their trepidation surrounding it. One Boerum Hill man tells the paper, “A few years ago, when the jail was still open, I walked in front of the jail with my family and some prisoners [on a corrections bus] started yelling at us.”